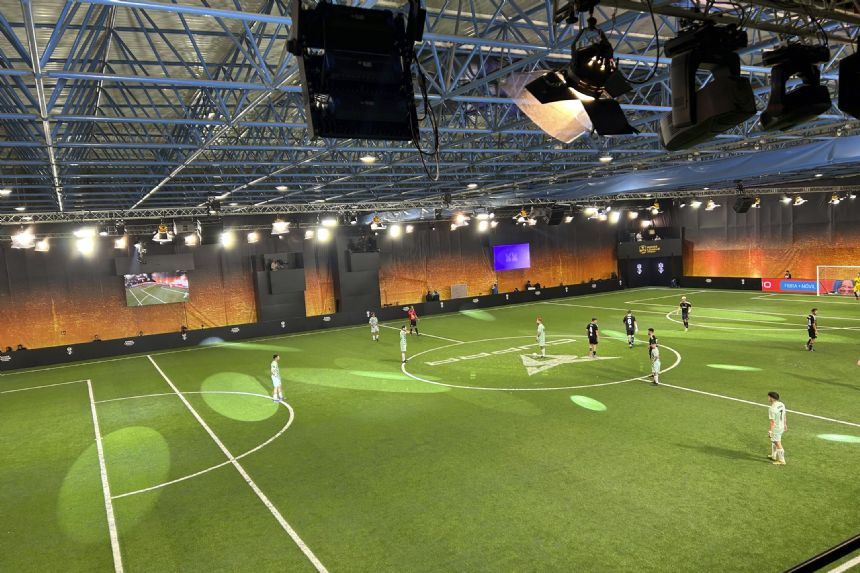 BARCELONA, Spain (AP) - If Gerard Pique's vision proves true, the future of soccer is already being played in an industrial pavilion located down a road past rows of stacked shipping containers in the desolate outskirts of Barcelona's port.

There, every Sunday evening from now until July, teams play seven-a-side soccer on artificial turf in front of a minuscule public of a few hundred guests. There are no ticket sales, games cannot be found on any television channel in or outside Spain, yet hundreds of thousands of eyes - young eyes most likely- are already watching on phones, tablets and computers via the Internet.

Welcome to the Kings League, the latest brainchild of Pique following his overhauling of tennis' Davis Cup. The former Spain and Barcelona defender retired in November just in time give his full focus to launching his brand of soccer.

The amateur league is a mix of old and the new. It includes known soccer personalities like former Real Madrid goalkeeper Iker Casillas, who is a president, or owner, of one of the 12 teams, and ex-Manchester City striker Sergio Aguero, who is a president-player, as well as several retired Spanish league players. In Round One, Mexico star Chicharito made a one-off appearance as a "ringer" even though he is an active player for the LA Galaxy.

For Joan Capdevila, a onetime elite left back who helped Spain win the 2010 World Cup and 2008 European championship, it is basically a chance to get back out there.

"Anytime I can, I try to put on my soccer boots," the 44-year-old Capdevila, who retired in 2017, told the Associated Press after playing Sunday. "So it is a pleasure to be here and see what it is like from the inside. (I'll do) anything that puts me in contact with a soccer ball, since it is a passion that I have had since I was little."

It is also an outlet for young local players, who make up the bulk of the league, to be seen after they passed tryouts and a draft. Many of them had to leave their small clubs, like David Soriano, a 23-year-old defender who cut ties with his fifth-tier side where he played in tiny stadiums and whose games were rarely, if ever, seen on any screen.

"After thinking it over a lot I opted for the Kings League and I have no regrets," Soriano told the AP. "This is of another magnitude (compared to this previous club). Loads of people are watching. It is an opportunity to be noticed and continue growing."

The parallels, however, to professional 11-on-11 soccer end there.

Most of the presidents of Kings League teams are not from sports. They are extremely popular Internet figures in Spain and the Spanish-speaking world, "streamers," YouTubers and "influencers" whose public most likely has hazy memories, if any at all, of when Capdevila and Casillas were kings of the sport. Those legions of millions of followers are now potential viewers of the Kings League, which is shown for free on the Twitch platform popular for its streaming of e-sports and videogames.

"The King's League was born out of a reflection on the way football is today and because there is a part of the audience that believes that football is sometimes becoming a boring product, that ninety minutes is too long, and that things don't happen and sometimes there are draws," Kings League CEO Oriol Querol told The Associated Press.

That meant, Querol said, ensuring that "three minutes don't go by" without something happening to keep viewers engaged.

Kickoffs are like water polo with the teams racing out to the ball in midfield. Similar to ice hockey, a yellow card earns a player a two-minute exclusion; a red card means a team must wait five minutes before substituting the expelled player. Draws are decided in a penalty shootout, where players start from midfield and have five seconds to score, a formula Major League Soccer used in the 1990s. Substitutions are unlimited.

Most enticingly, each team coach draws a "gold card" before kickoff that gives him one "secret weapon." They include having a free penalty kick at any point, excluding a rival player for two minutes, and that any goals scored by the team in the next two minutes count double. A new card just introduced will allow teams to deploy Pique himself on the field in their service.

After goals, flares shoot sparks from behind the net while strobe lights flash and spotlights swirl. Video reviews are done on a huge screen where players and coaches can argue and try to sway the referee, who wears one of the multiple cameras and microphones.

And then there are the gimmicks straight from the world of fiction or film: a masked player named "Enigma" has played, and Aguero himself played his first match dressed as a clown.

The only catch to the design of non-stop spectacle are the stoppages caused by the high balls that hit the rafters.

But all in all, it seems to be working.

The league says its peak viewership has reached 1.3 million. On Sunday, some 700,000 were following via Twitch or TikTok even while Real Madrid was playing at Athletic Bilbao in one of the Spanish league's biggest rivalries.

Companies have taken notice. Sponsors include Adidas and Spotify. McDonald's delivery service is among the advertisers.

Barcelona, the "real" soccer club, seems eager not to be left behind. Barcelona president Joan Laporta appeared on Pique's pre-game show last week to say that he will open Camp Nou to host the Kings League Final Four in March.

The Kings League has also caught the attention of, in theory, its greatest rival. Spanish league president Javier Tebas has called it a "circus" that "cannot compare with the soccer industry."

Could he have reason to worry?

Twenty-year-old Marc Leon was rewarded with a invitation along with his two friends after they founded a fan club for Rayo Barcelona and got noticed by its president on social media. They bang a drum, wave a flag and sing pep songs during Rayo's games in a vestige of old-school soccer fandom that has slipped into what is in reality a huge audio-visual production set.

For Leon, he has time enough in his life for both kinds of soccer.

"It's different. You are not going to beat the traditional soccer that we have grown up with," said Leon. "Like the other day when we came here, after we went running home to watch Barca play Madrid. We enjoy both."

Yet if the Spanish league is already "traditional" for Leon and his pals, perhaps Pique has already won.