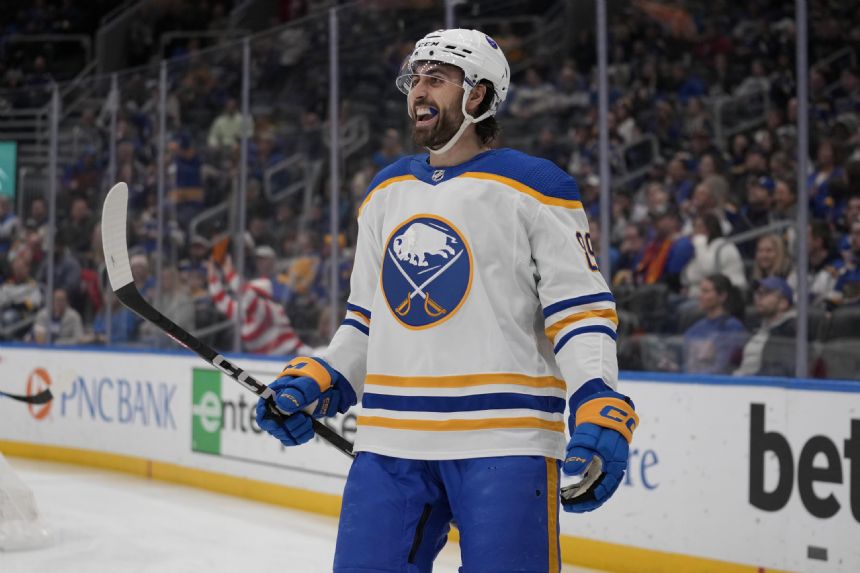 ST. LOUIS (AP) - Tage Thompson and Jeff Skinner each had a goal and two assists as the Buffalo Sabres beat the St. Louis Blues 5-3 on Tuesday night.

Thompson extended his point streak to five games, his third streak of five or more games this season. It was also his ninth game this season with three or more points.

Skinner also has a five-game point streak, his second such stretch this season.

Alex Tuch had a goal and an assist, and Owen Power and Dylan Cozens also scored for the Sabres, who snapped a nine-game losing streak in St. Louis dating to Jan. 21, 2012.

Ukko-Pekka Luukkonen made 26 saves for Buffalo, which improved to 2-6-1 in the second game of back-to-backs this season.

Ivan Barbashev, Brayden Schenn and Jordan Kyrou scored for the Blues, who finished 3-4 on their longest homestand of the season. Jordan Binnington made 26 saves.

Skinner gave the Sabres the lead 60 seconds in. Thompson created the chance by stripping Tyler Pitlick of the puck in front of the Blues net and feeding Skinner.

Power made it 3-0 midway through the first period, scoring on a perfect backdoor feed from JJ Peterka.

Thompson added his 33rd of the season on a backhand 70 seconds into the second.

Back-to-back goals from Barbashev and Schenn in the second gave the Blues some life. Defensemen Torey Krug and Justin Faulk assisted on both goals.

Kyrou's goal from the high slot 47 seconds into the third cut it to 4-3.

The Blues had a 6-on-4 after Peyton Krebs was called for a faceoff violation with 1:46 left, but Cozens' empty-netter with a minute left sealed it.

Star forward Vladimir Tarasenko and Krug both returned for the Blues. Tarasenko sat out 10 games with a hand injury, while Krug missed 13 due to a lower-body injury.

NOTES: The Blues placed LW Pavel Buchnevich on injured reserve after he underwent a surgical procedure to address an ankle infection. Buchnevich, who has 38 points (15 goals, 23 assists) in 38 games, will be re-evaluated after the All-Star break. ... Buffalo LW Victor Olofsson had his four-game goal streak snapped.