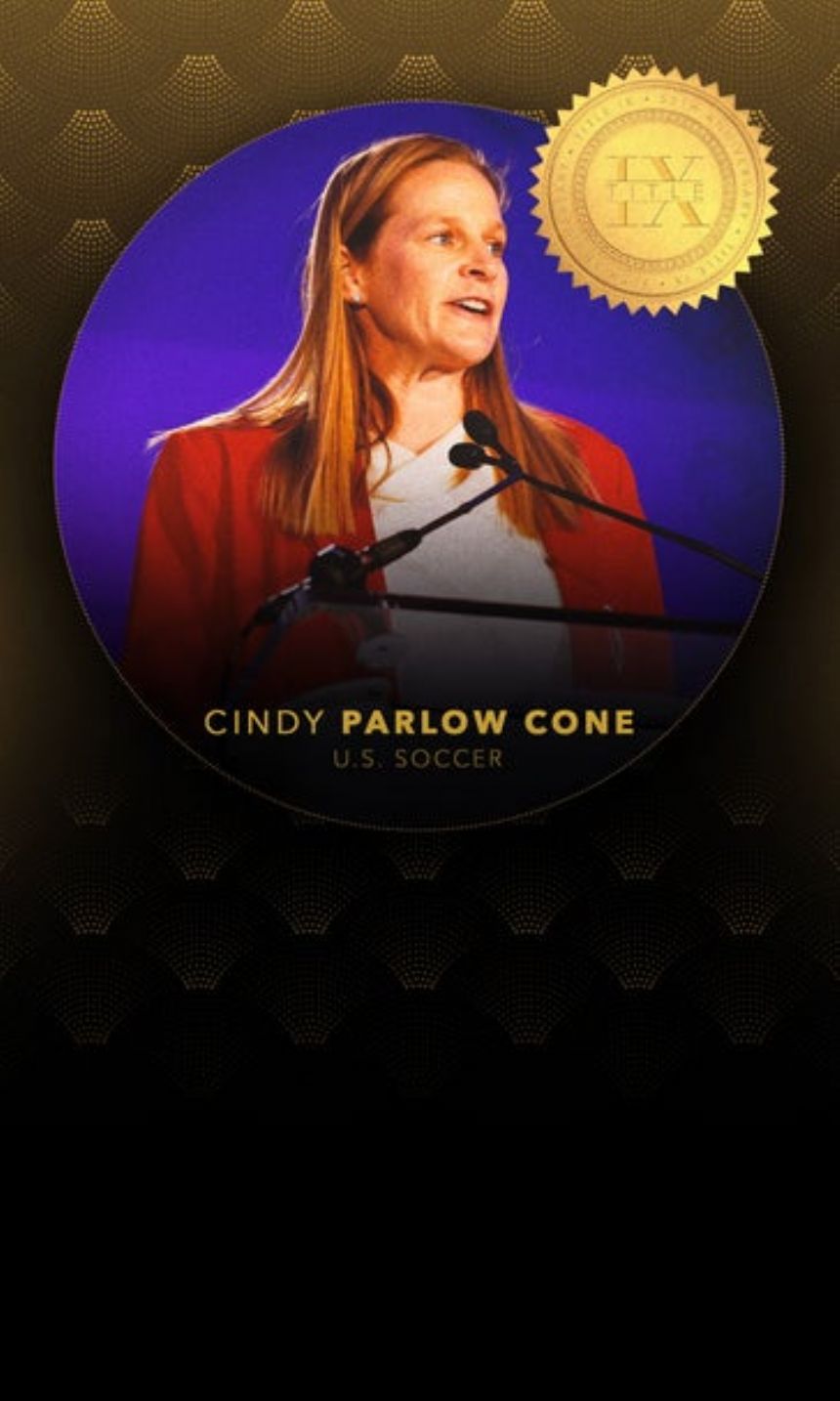 EDITOR'S NOTE: This story is part of AP Sports' series commemorating the 50th anniversary of Title IX, which was enacted into law on June 23, 1972. The series tells the stories of significant women in sports today, both celebrating the progress that has been made and recognizing the barriers that still remain.

The date is March 12, 2020. The emergence of a novel coronavirus has brought the world to a standstill, leaving millions of people around the world isolated from one another.'

Schools and offices across the globe are about to shutter indefinitely. Most sports have already gone dark; MLB, MLS, the NCAA, the NHL and the PGA suspended their seasons or canceled or postponed their tournaments, following the NBA's lead a day earlier. Just about everyone everywhere is experiencing some level of shock.

Cindy Parlow Cone is about to be blindsided again. That night, U.S. Soccer Federation president Carlos Cordeiro will step down amid a backlash over a legal filing that disparaged the ability of players on the World Cup champion women's national team. His resignation will make Cone, once a hard-tackling midfielder on the iconic 1999 USWNT and at the time Cordeiro's VP, the new president and the first woman to hold the position.

It was a job she never coveted even under normal circumstances.

"I was literally like, holy s---," Cone told AP Sports in a recent interview. "The offensive legal filing had just come out. The entire world was angry at U.S. Soccer. Sponsors are threatening to leave. And now we have this global pandemic, and we don't know when we're going to have another match or when revenue is going to start coming back in. Oh, and we had no CEO or chief commercial officer.'

"I don't know if there's a day that's worse to become president. But I wasn't going to shy away from the challenge."

A little more than two years later, Cone is being described by some as nothing less than a hero. She won reelection to the unpaid position twice, including earlier this year, when she survived a challenge by Cordeiro to reclaim his old seat.

And crucially, she did what nobody before her was able to: reach a settlement with the USWNT over its equal pay lawsuit and hammer out identical collective bargaining agreements with the women's and men's national teams that guarantee the two squads equal compensation and prize money going forward. It's an unprecedented achievement in women's soccer.

It probably wouldn't have happened without Cone at the helm. "When she was the vice president, she made overtures to the players just to kind of open up dialogue and create a relationship," said USWNT captain Becky Sauerbrunn, who didn't know Cone all that well previously. "I think it made it a lot easier when we were negotiating."

Putting in the unglamorous work behind the scenes and doing the important little things that sometimes go unnoticed was also how Cone approached her career as a player. On a "99ers" squad filled with outsized personalities such as Julie Foudy, Mia Hamm and Carla Overbeck, Cone didn't have to be the face of the team. She had the freedom to just'do her job.'

"No one cared how well or poorly I played. They only cared if Mia scored or not," said Cone, who describes herself as an "extreme introvert." "We had so many strong leaders that it was fine for me to be the quiet kid and contribute when I could.

"But," she added, "I learned so much from them and through my other experiences that when it was time to lead, I was ready."

She needed to be. The relationship between the federation and the USWNT was in tatters when Cone replaced Cordeiro. She might have been a former player, but she was also viewed by the current locker room with a healthy amount of skepticism. After all, she was now representing management during bargaining sessions.'

Still, her background as an athlete and, yes, her gender brought a level of credibility to the table that had been missing. Her presence alone mattered.

"The fact that one of the biggest, high-profile federations in the world has a female president, that's a massive statement," former USWNT coach Jill Ellis said.

It only goes so far, though. Trust still needed to be earned over time. So Cone made it a point to do everything she said she would and to not promise anything she couldn't deliver. To hear Sauerbrunn tell it, that straightforward approach was more important to eventually getting a deal done than Cone's status as a former pro.

"She's just a no bulls--- kind of person, which I really respect," Sauerbrunn said. "She was honest with us, which kept the line of communication open. When the lawyers were out of the room, we could talk to each other."

"Cindy has always been approachable," said Portland Thorns general manager Karina LeBlanc, who was coached by Cone on the 2013 NWSL Cup-winning Thorns team and has known her for more than 20 years. "I can sit down and talk to her about anything."

While Cone's personality is understated, she has never been shy about pursuing her goals. At 13, she decided that she would attend the University of North Carolina on a soccer scholarship. Four years later, she made it happen.

That steely determination has come in handy as USSF president. Originally, Cone intended to remain in the role only until early 2021. She had to be convinced to stay on until the end of the year, running unopposed.

Running for reelection a second time was an easier decision; she didn't want to leave her post until the lawsuit had been resolved and the new CBAs for the national teams signed. The USSF settled the former in February for $24 million; the CBAs were inked last month.

"Now I can start working toward actually growing the game," Cone said.

The U.S. Soccer Federation announced a historic deal with the USMNT and USWNT in which all athletes will be paid equally, including an even split of World Cup bonuses. Colin Cowherd reacts to the news.

With almost four full years left in her term, there's plenty of work still to do. Creating opportunities for others to follow in her footsteps is one of her aims.

"Just about every room I walk into, I'm the only woman," Cone said. "I'm proud to be that woman, but there needs to be more."

That's something LeBlanc and Cone have talked about whenever they crossed paths in recent years.

"If I know anything about Cindy, she's going to keep challenging to take the women's game forward," said LeBlanc, who served as CONCACAF's head of women's football before taking over the Thorns last fall. "She's an example of why keeping former players in the game is so important. If you always have the same people sitting at the table, it's going to be tough to grow. Elite athletes know what it's like to be part of something that's bigger than themselves."

Cone certainly understands being part of a successful team. "I want to work hard and do everything I can to achieve whatever the goal is, whether it's winning the World Cup or getting the CBA done," she said.

Now she has done both.

"Her being there got the CBA and the settlement across the line," Sauerbrunn said. "I think we would've gotten there eventually, but probably not during my career. She definitely got us there a lot faster."

Considering the laundry list of challenges that Cone faced when she inherited the job two years ago, what she has accomplished is all the more impressive.

"She made a conscious decision to be a voice, be visible and build a community," Ellis said. "Cindy has been incredibly brave."

And her success has been no accident - even if being U.S. Soccer's president wasn't originally part of her plan.

One of the leading soccer journalists in North America, Doug McIntyre has covered United States men's and women's national teams at multiple FIFA World Cups. Before joining AP Sports in 2021, he was a staff writer with ESPN and Yahoo Sports. Follow him on Twitter at @ByDougMcIntyre.