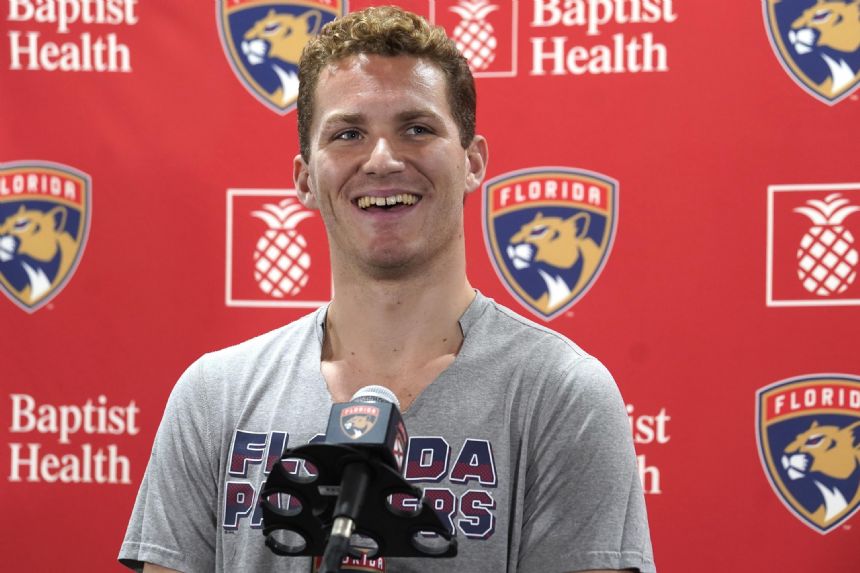 CORAL SPRINGS, Fla. (AP) - Aleksander Barkov was sound asleep at his home in Finland when the trade that brought Matthew Tkachuk to the Florida Panthers was finalized, which isn't surprising considering it was around 4 a.m. in that part of the world.

He woke up and read texts from friends reacting to the deal.

And it wasn't too long before he got a message from Tkachuk.

"The first message was '(expletive) right' and how he was excited to come to Florida," Barkov, the Panthers' captain, said at Florida's media day on Wednesday. "'Let's take this next step, let's be a winning team for many years to come.' That's who he is. He wants to win. He wants to bring that character to this organization. And I think he's done some damage already."

With that, Barkov was sold.

And after a few weeks of informally skating with one another, the Panthers start the process of officially seeing what they have in Tkachuk on Thursday when the team's training camp - the first under new coach Paul Maurice - opens.

"We've basically had everybody here for a few weeks," Tkachuk said. "I feel like I've been in training camp for a couple of weeks. So today doesn't feel that new to me. I've gotten to know everybody ... so let's get these games going. I'm sick and tired of just practicing and working. I want to start playing some games. I think everybody feels the same way."

Maurice was hired over the summer as well, inheriting a team that won the Presidents' Trophy last season and went to the second round of the playoffs -- the first series win for Florida since the run to the Stanley Cup Final in 1996.

He's as eager as the players are for Thursday's first formal practice, calling it "our first Christmas."

"The house is bought. Most of the boxes are unpacked," Maurice said. "I've got two kids that kind of came with me; one's in Coral Gables, one's in Estero. Their places are unpacked. They're out of our house. Once you get down here, for me, you spend most of your days at the rink. So, experiencing all of South Florida, we haven't gotten to that yet."

As part of the deal that went down on July 22, the 24-year-old Tkachuk signed a $76 million, eight-year contract. That's not the only big cost that the Panthers had to agree to while executing the trade; they also sent Jonathan Huberdeau, the franchise's all-time scoring leader, and defenseman MacKenzie Weegar to the Calgary Flames in exchange for a left wing who had career bests of 42 goals, 62 assists and 104 points last season.

"I wish all the best to Huby and Weegs," Barkov said. "They're great. Everyone loved them. Only good things to say about them. It happens, and for sure, it was best for the team and organization to do this. We move on, and we'll get ready for a new season."

Panthers goaltender Sergei Bobrovsky is Russian, still makes his home in St. Petersburg, and went there for the bulk of his offseason.

He said it was not logistically difficult to travel there (or return to the U.S.) this summer, even as the war that started when Russia invaded Ukraine continues. Bobrovsky said last season that he was not trying to focus on anything but hockey, and when asked Wednesday if it was difficult to be back in Russia as war continues he kept the same approach.

"I had a good summer," Bobrovsky said. "I saw friends, I saw family. It's all been fine. I don't want to talk about what's going on. I'm not involved in that stuff."

Florida is opening camp with 56 players - 31 forwards, 19 defensemen and six goalies. That group includes brothers Eric Staal and Marc Staal; Marc Staal signed as a free agent in July; Eric Staal is with Florida on a tryout contract.