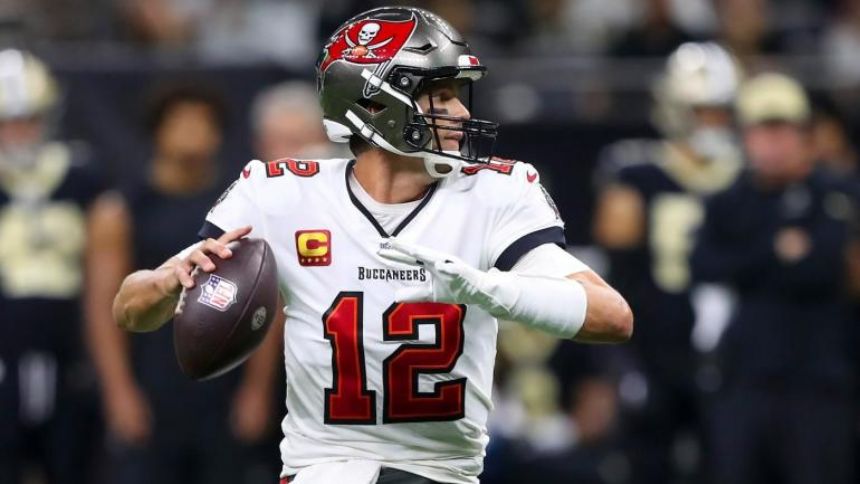 Tom Brady was not officially listed on the Buccaneers' injury report Thursday, but the veteran quarterback appeared to be dealing with some discomfort at practice. According to those on the scene in Tampa, Brady was constantly shaking the ring finger on his right throwing hand throughout the session.'

As the Tampa Bay Times notes, Brady would grip the football, throw a pass and then look down at his hand just before giving it a shake. He even had something sprayed on his right hand. In the NFL Network video detailing Brady's finger ailment below, you can see B-roll of the quarterback shaking and looking down at that finger on numerous occasions.'

Tom Brady isn't on the Bucs injury report but was repeatedly shaking the ring finger of his right hand which he said Monday he had United against the Saints. pic.twitter.com/JRqYzxHXKx

On the latest episode of his "Let's Go" podcast that was released Monday, Brady did admit that he hurt his finger in the midst of Tampa Bay's Week 2 win over the New Orleans Saints.'

"I banged it up pretty good," he said. "But, you know, it didn't affect me at all in the game. It's just going to be sore throughout the week. One of those bumps and bruises that come along with playing. ... It's demolition derby out there. It's who can recover fast enough in order to put yourself in a position to practice, prepare and then go play well the next week."

When asked about the finger on Thursday, Brady said he felt "great" but also threw out the caveat that "it's football season, so ..."

Given he's been on the practice field and not even listed on the injury report, this finger issue doesn't seem like it'll prevent Brady from suiting up Sunday when the Bucs take on the Packers. After all, he played in an AFC Championship back during the 2017 season after getting during that week of practice. With that in mind, playing through this banged-up finger should be a walk in the park for No. 12. '