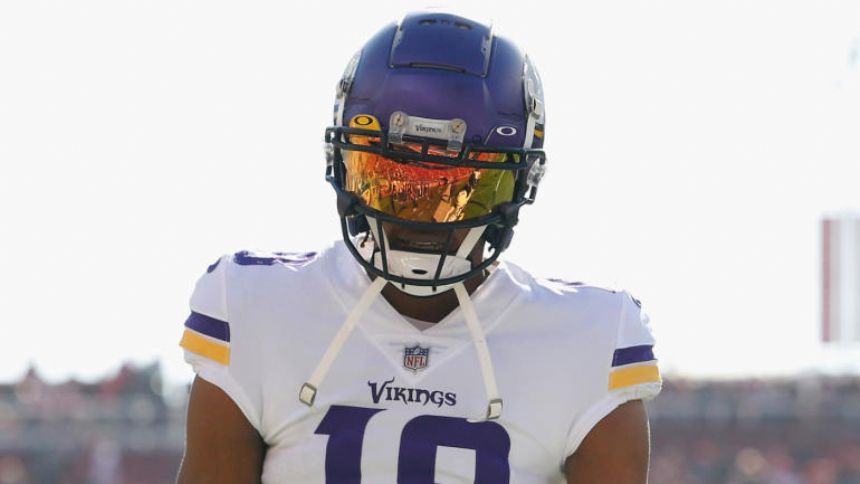 Quarterbacks own the headlines in the NFL, but if one position made a play to become the new hot topic in 2022, it was wide receiver. This offseason saw a number of big names change teams, and a handful of others cashed in with record contracts. And it's no wonder, considering how important a No. 1 pass catcher is in today's game.

But which of the NFL's wide receivers are truly the best entering 2022? We're glad you asked, because we ranked them.

What, exactly, was our criteria for sorting the best of the best? We tried to balance'past production,'present value'and'future outlook. But at the end of the day, it might be easier to consider the following list our best answer to these two questions: which WRs do we trust the most? And which WRs are best positioned to succeed this year? In close calls, we tried to separate WRs from their respective teams to consider their value; for example, if you swapped A.J. Brown and Allen Robinson, whose team would be better off?

Without further ado, the top 10:

The Seahawks' DK Metcalf, the top alternative here, gets all kinds of love for his freakish combo of imposing size and speed, but Brown has a similar profile with just as, if not more, consistent production. Lingering injuries are something to monitor, and his numbers aren't always gaudy, but he's a bona fide alpha, creating plays with both his bulk, power and explosiveness. He's also set up to succeed as the Eagles' new No. 1, working alongside ascending pass catchers like DeVonta Smith and Dallas Goedert.

Allen's been doing it the right way for so long that it's almost surprising he only just turned 30. A pure route-runner who could be any QB's best friend, he's logged at least 100 catches and 1,100 yards in four of his last five seasons, and he's poised to remain Justin Herbert's top safety valve in a potentially big year for the Chargers. If Mike Williams is L.A.'s big-play outlet, then Allen has been the team's Mr. Reliable for a half-decade and counting, serving as one of the NFL's steadiest high-volume targets.

Deebo was a dawg well before he broke out as the 49ers' offensive MVP in 2021, always bringing a running back's vision and tight end's physicality to multiple roles out wide. Kyle Shanahan simply kept feeding him, either downfield or in the backfield, to prompt his statistical emergence. In terms of bang for your buck, you won't find many better athletes at his size (6-0, 215), and while it's fair to wonder if he'd still dominate the stat sheet as a strictly traditional receiver, he's got way too much raw speed to overlook.

Annually underrated, Evans has eclipsed 1,500 receiving yards "just" once in his eight NFL seasons. But he's never failed to top 1,000, and he's gotten a bit more reliable in terms of catch rate since teaming up with Tom Brady. Size has always been on his side (6-5, 231), but he still moves smoothly at almost 29, and he still stars as a deep-ball threat, averaging over 14 yards per catch for five straight seasons. Plug him into any lineup, and you've got yourself a receiver who, naturally, is almost always open.

Perhaps no one listed here is under more pressure to perform than "Cheetah," now the NFL's highest-paid wideout after an abrupt trade from Kansas City. His stockier stature (5-10, 185) has never prevented him from owning opponents in big spots; not only is he a lightning-fast deep-ball extraordinaire, but he's unafraid of outmuscling guys in tight windows. But it's not crazy to wonder how his game, sans Patrick Mahomes, will translate to a Dolphins offense seemingly more geared toward short-area concepts.

After five years as the swaggering star of the Vikings' WR room, Diggs has become an even more complete target as Josh Allen's favorite outlet. He simply does everything well. The speed element is still there, making him a sturdy candidate to haul in Allen's rocket launches, but he really wins off the line and in his breaks, mastering his routes and maintaining reliable hands. As he inches closer to 30, he might rely even more on possession skills, but in Buffalo's deep, explosive offense, that's hardly a bad thing.'

If Stefon Diggs makes route-running look cool, well, Kupp does the same, albeit more frequently. Only injuries prevented him from emerging as a true No. 1 earlier in L.A., where he quickly became Matthew Stafford's go-to man in 2021. Durability is something to keep an eye on, considering his high volume and slighter build, but Kupp's mastery of the mechanics should survive wear and tear. He's not the biggest, he's not the fastest, he's not the strongest. But he creates space and reels in passes with such ease.

Big plays are the name of the game in today's pass-happy NFL, and Chase wasted absolutely no time following in the footsteps of another LSU product-turned-All-Pro (more on him below) as a rookie. Was he a little streaky at times? Sure. But he was also the biggest reason for QB Joe Burrow's ascent to MVP and Super Bowl candidacy. His instant burst after the catch is reminiscent of peak Odell Beckham Jr. The only mission with him is getting the ball in his hands, because he's got the talent to do the rest.

His historic start is similar to that of Vikings legend Randy Moss, and the comparison isn't wild. In two short years as Minnesota's top target, he's not only replaced Stefon Diggs' swagger and production but topped it. The slender No. 1 is the perfect contemporary wideout -- lightning fast with good hands, good height and good routes. Nothing against Kirk Cousins, but imagine if he played with Patrick Mahomes, too. He's one of the safest bets to rack up both volume and highlight-reel touchdowns.

The Raiders may or may not have the offensive line and defensive depth to justify deep-playoff hopes, but it's no wonder they paid up to land Adams, and not just because he's friends with Derek Carr. The longtime Packers star has played a full season just twice in his eight-year career, but when he's on the field (even banged up), he's the total package, averaging over 90 yards per game in three of his last four seasons. He gets open at every level, has reliable hands and shows up on clutch downs. Any concern about his split from Aaron Rodgers should be mild if his public and private chemistry with Carr is any indication of their future together.

As you can see, we could've easily turned the top 10 into a top 20, because all of these guys are clear-cut starting material. Metcalf was the closest to cracking the top 10, as few receivers are as physically imposing, though he'll now be catching passes from QB(s) other than Russell Wilson. Godwin has top-10 ability but is coming off an injury. Moore'does, too, but remains attached to a mediocre QB setup in Carolina. Lamb, Higgins, Smith, McLaurin and Waddle have varying styles and skill sets but could easily become the next generation of perennial Pro Bowlers. Cooks has somehow managed Pro Bowl-caliber production despite flipping teams every other year, while Beckham remains a star talent when healthy and paired with other help.

We've got a mix here of older or experienced possession receivers, a la Robinson and Thielen, and younger up-and-comers like Pittman and St. Brown. All of these receivers still have -- or can unearth -- Pro Bowl talent, but they aren't necessarily true No. 1 targets at this stage of their respective careers. Most of them, in fact, have been or could be elite as No. 2 or No. 3 options.

All three are premium talents when fully healthy and motivated, but all three are major question marks for 2022. Ridley, in fact, won't suit up at all, serving a yearlong suspension for violating the NFL's gambling rules. But assuming he returns in shape, for the Falcons or someone else, he's got proven home-run ability. Hopkins has long been one of the game's better possession targets, bringing elite hands to Houston and Arizona, but missed six games due to injury in 2021 and will miss another six this year due to suspension. Thomas, meanwhile, is three years removed from a 1,700-yard season as the Saints' ultra-reliable No. 1, but he's played all of seven games in two years. Maybe his route-running will dominate again, but first he's gotta get healthy.