Trey Mancini homers in first start with Astros since trade 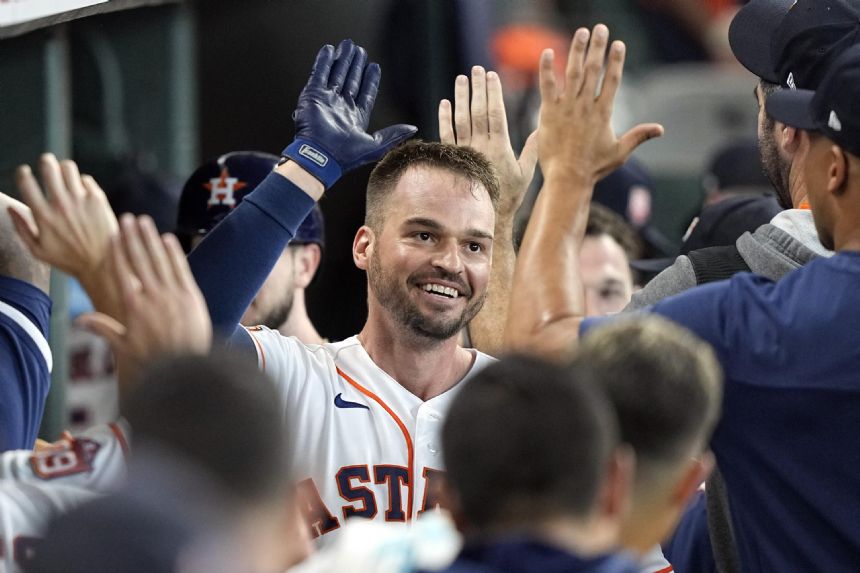 HOUSTON (AP) - Trey Mancini homered in his first start for Houston to back a sterling performance by Jose Urquidy, and the Astros beat the Boston Red Sox 6-1 Wednesday.

Mancini, who was traded from Baltimore on Monday to bolster the offense with first baseman Yuli Gurriel struggling, grounded out as a pinch-hitter in his Astros debut Tuesday night.

Things went much better in his first at-bat Wednesday, when he knocked a pitch from Rich Hill (4-5) into the seats in left field for a two-run shot that made it 4-0 with no outs in the second inning.

Urquidy (10-4) allowed two hits and tied a career high with 10 strikeouts in seven shutout innings. He retired the first 13 batters before plunking Alex Verdugo with one out in the fifth. He sat down the next two batters in that inning before Reese McGuire got Boston's first hit on a single to open the sixth.

Tommy Pham doubled with two outs in the inning, but Urquidy struck out Rafael Devers to end the threat.

Jose Altuve tied a career high with four hits to allow Houston to avoid a sweep after losing the first two games of the series. It was the 34th four-hit game of Altuve's career, tying him with Craig Biggio for most in team history.

Hill struggled in his return from the injured list, with the Astros jumping on him for six hits and four runs in three innings. He had been out since July 1 with a sprained left knee.

Brayan Bello took over for Hill but got just two outs before leaving with a strained left groin.

The Astros took an early lead when Altuve scored on a groundout by Yordan Alvarez in the first. Houston made it 2-0 when Alex Bregman drove in a run on a sacrifice fly.

Kyle Tucker extended the lead to 6-0 with a two-run double in the fifth inning.

Astros: RHP Lance McCullers Jr., who has been out all season with a strained right forearm, will make a fourth rehabilitation start for Triple-A Sugar Land on Sunday. McCullers allowed three hits and three runs - two earned - in 3 1/3 innings Tuesday night for Sugar Land.

Christian Vazquez also got his first start at catcher for the Astros after a trade from Boston on Monday. He didn't fare well against his former team, going 0 for 4 with a strikeout, although he did navigate Urquidy through his gem.

Will Smith, traded from Atlanta on Tuesday, made his Houston debut in the ninth. He allowed a solo home run to Devers.

Red Sox: First baseman Eric Hosmer, acquired in a trade with San Diego on Tuesday, is expected to join the team in the opener of a four-game set at Kansas City on Thursday night. RHP Nick Pivetta (8-8, 4.47 ERA) will oppose Kansas City LHP Kris Bubic (2-6, 5.45).

Astros: Justin Verlander, who leads the majors with 14 wins and a 1.81 ERA, opposes Cleveland's Zach Plesac (2-9, 4.33) when the Astros open a four-game series against the Guardians.