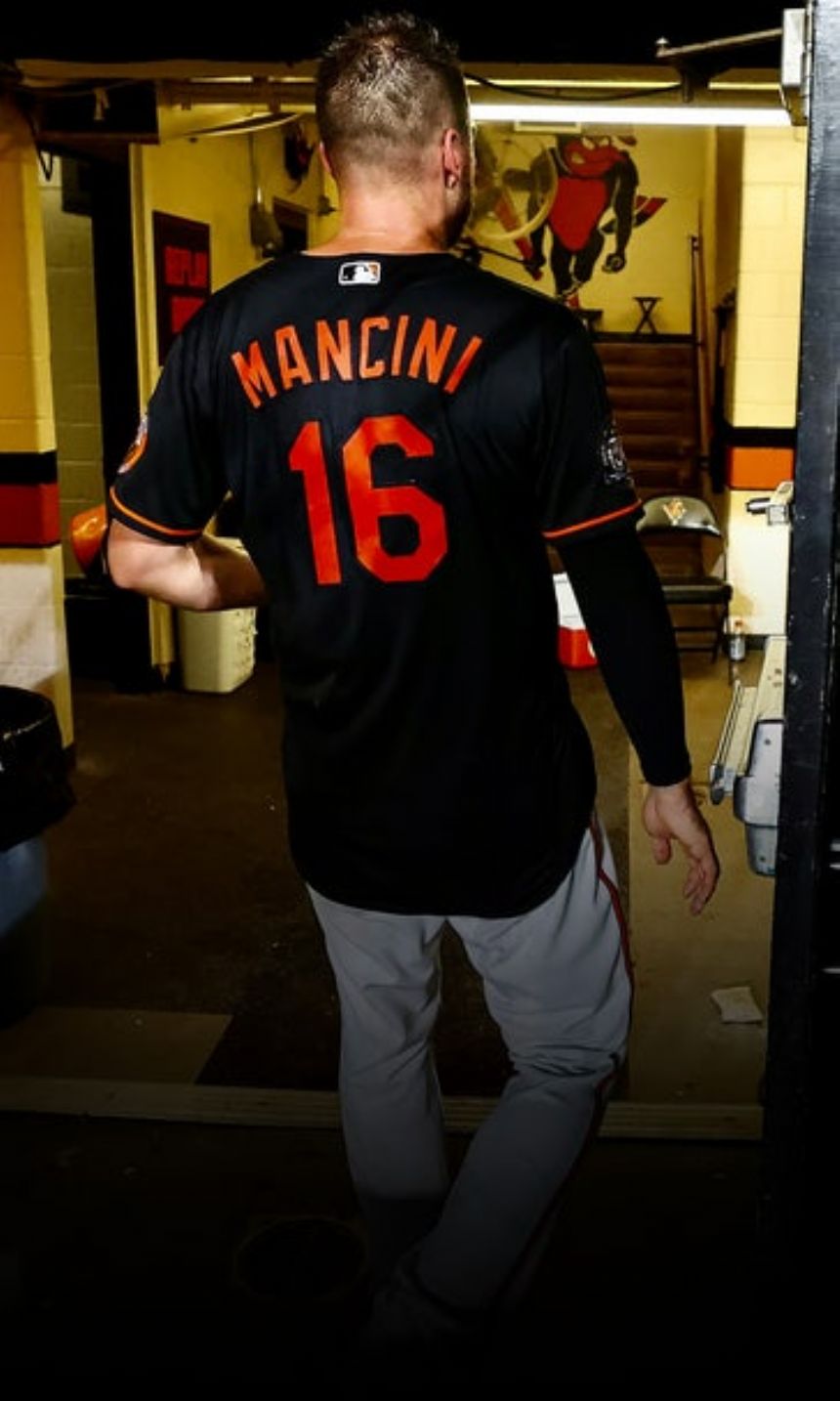 The yet-to-debut, No. 6 Orioles prospect had already finished his minor league season and was staying fresh at the team's Spring Training complex just in case the O's needed reinforcements down the stretch as they battled for a Wild Card spot. In Mancini's mind, it was mostly eyewash. He'd get his big league call-up at some point in 2017.

But then Steve Pearce, the Orioles' right-handed bench bat, hurt his elbow and landed on the 60-day IL, opening the door for Mancini. A few days later the 24-year-old made his big league debut at Camden Yards against the Red Sox, launching a homer in the fifth inning for his first career hit.

Mancini caught absolute fire down the stretch for the O's, hitting three homers and a double in just 15 plate appearances. But in that fateful AL Wild Card loss to the Blue Jays, Mancini never saw the field.

"I don't think at that time, I truly realized what it all meant." Mancini told AP Sports back in May. "It was cool to me, yeah, but looking back I'm really lucky to have gotten to experience that. A lot of guys go their whole careers without experiencing a playoff game."

It would be the closest he ever got to a postseason ball field as an Oriole.

On Monday afternoon, five years and ten months after he first donned the cartoon bird, Mancini was dealt to the Houston Astros as part of a three-way trade with the Tampa Bay Rays.

In his five plus seasons with the club, Mancini became a fan favorite, at times the only watchable lifeforce on abysmal, zipless Orioles teams. The proverbial "hold-your-hand-through-the-darkness" player, someone who never grumbled, never pouted and who oozed kindness and compassion wherever he went.

His well-documented battle with colon cancer in 2020 only further deepened his connection to the city and fanbase, as Trey received treatment down the road at Johns Hopkins Medical Center. As his story became national news, Mancini began spreading awareness for others with his disease, even while undergoing his own chemotherapy in Baltimore during the 2020 season. Mancini returned on Opening Day of 2021 to a standing ovation.

"I love this city, I love these fans." Mancini shared. "It's been kind of a strange journey, going through this entire rebuild, but I've always loved my time here. It's a really special place no matter what happens."

What happened was a trade, a trade that months ago felt like a foregone conclusion. Mancini was an impending free agent, the Orioles a club destined for another fifth place finish. His departure seemed inevitable. But then the funniest thing happened: Baltimore started winning.'

In July, the club ripped off 10 straight wins, catapulting themselves into the hunt for the third AL Wild Card spot. Even after Mancini got a curtain call in his final home game before the trade deadline, after one of the most unique and unforgettable homers in franchise history, it still felt like the team was too close to contention for GM Mike Elias to actually pull the trigger. The vibes were too good and Mancini too fundamental to those vibes.

Baltimore's shock ascension from AL East punchline to pesky playoff contender had them at 51-51, just three games out of the third Wild Card spot heading into play on Monday night. They've evolved into a close-knit unit that's helped to reinvigorate a dormant franchise. Attendance at Camden Yards is up, the energy is too. That Orioles magic, that ... feeling, felt like it'd finally returned.

But dealing away Mancini is one hell of a vibe switch. It's a miscalculation: a misguided prioritization of value over values. The 2022 Orioles have been one hell of a party, and by trading Mancini, Mike Elias is suddenly the guy tripping over and breaking the speaker, so the music cuts off.

"It's gonna be tough without him," Orioles first baseman Ryan Mountcastle said to MLB.com's Zachary Silver. "And I know a lot of us are pretty upset."

Since becoming the team's head baseball operations person ahead of the 2019 season, O's GM Mike Elias has been ruthlessly efficient, willing to deal away veterans when given an opportunity to build for the future. It's a cold-hearted approach to team building that's finally begun to pay off in the win column.

Objectively, it's a solid haul - Seth Johnson was Tampa's No. 6 prospect per FanGraphs, Chayce McDermott was Houston's No. 10 - for two months of a .751 OPS first baseman about to hit free agency, but this is a trade with ramifications far beyond the spreadsheet.'

Every city, every fanbase has formed relationships with players. At times those links can feel somewhat forced., They can feel like a product of chance, somewhat obligatory or transactional. But for whatever reason, Trey's relationship with Baltimore always felt natural and authentic.'

When asked back in May about what he'll remember most from his time in Baltimore, Mancini zeroed in on the 2019 All-Star break. He'd had a pretty brutal first half of the season and was scuffling to find his footing as the face of the rebuilding Orioles.

But instead of flying home to Florida for the break, Mancini stayed behind in Baltimore in order to spend some time with a young O's fan named Mo Gaba who'd been diagnosed with multiple severe types of cancer.'

"We'd met up once before," Mancini remembered. "But I wanted to hang out with him without any cameras, so I took him and his mom to Dave & Busters. We had a great time. That moment just gave me a ton of perspective and helped turn my mental state and my season around."

The two developed an extremely close bond before Gaba tragically passed away on July 28, 2020, especially after Mancini received his own diagnosis in March of that year. Trey would regularly stop by the Gaba household just to spend some time with Mo in between chemo treatments.

The team now holds an annual Mo Gaba Day at Camden Yards on July 28, a day on which Mancini has homered each of the last two seasons, including his incredible sun-aided inside-the-parker last week. That Mo Gaba Day will live on indefinitely, is just a small, but significant part of Mancini's Baltimore legacy.

But sometimes it's about a bit more than that. Fans love winning because fundamentally, they're looking for something or someone(s) to latch onto; anything they can emotionally latch onto in order to distract them from the doldrums of their daily lives.'

In Baltimore, Trey Mancini didn't do a whole lot of winning - only 37% or so of his games to be exact - but he did succeed in the much more important task: connecting. Teams rise and fall, seasons come and go, but players and their actions stand the test of time. That reality is perhaps what Mike Elias is missing. It's not always about the wins and losses, whether in 2022 or 2026 or 2032, sometimes it's about having a reason to give a crap, it's about being able to care.