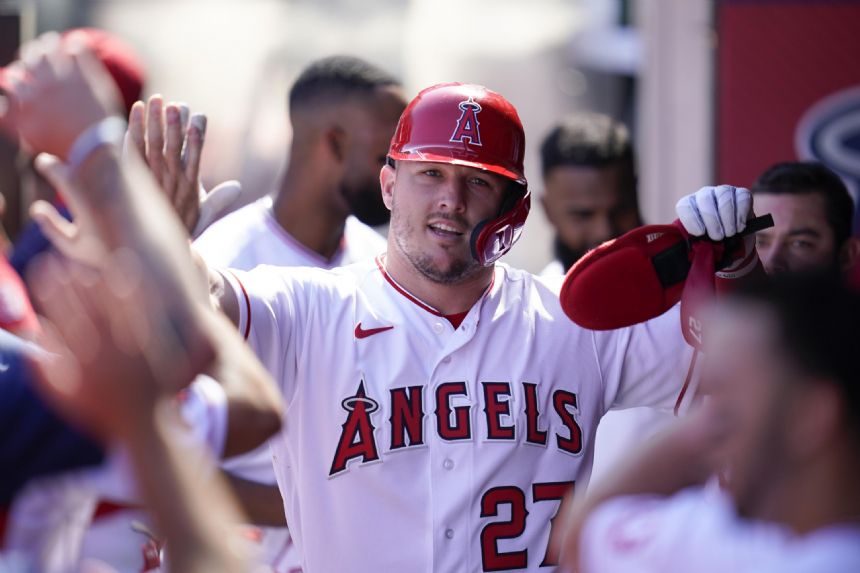 ANAHEIM, Calif. (AP) - Mike Trout had his 39th homer among his three hits, and the Los Angeles Angels wrapped up their final homestand with their season-best seventh consecutive victory, 8-3 over the Texas Rangers on Sunday.

Shohei Ohtani extended the majors' longest active hitting streak to 17 games with a first-inning single, equaling his 17-game streak for the Nippon-Ham Fighters in 2016.

Rookie Livan Soto and Taylor Ward also had three hits for the Angels, who improbably finished the Anaheim portion of their seventh consecutive losing season and eighth consecutive non-playoff season by sweeping a six-game homestand for the first time since July 2016. The Halos also extended their longest winning streak since April 2018.

If Philadelphia holds on to make the postseason, Los Angeles will have the longest active skids in the majors in both categories, sharing the postseason drought with Detroit.

Corey Seager hit a two-run homer for the Rangers, who have lost five straight and 11 of 14. Texas was swept in a three-game series at Angel Stadium for the first time since September 2018.

Trout's solo homer in the fourth inning was the 44th of his career against the Rangers, surpassing Reggie Jackson for the most homers hit against the franchise since it moved to Texas in 1972. The three-time AL MVP, who sat out Saturday's game after fouling a ball off his foot Friday, has hit 15 homers since coming off the injured list Aug. 19.

Soto had a two-run double and David Fletcher added a two-run single while the Angels sent 10 batters to the plate during their six-run first inning against Tyson Miller (1-2). After rookie catcher Logan O'Hoppe got his first career RBI with a bases-loaded walk, Soto and Fletcher followed with big hits.

Jaime Barria (3-3) pitched 1 2/3 innings in relief of starter Tucker Davidson for the Angels, and Jo Adell had an RBI single in the seventh.

Davidson pitched four solid innings before stumbling in the fifth for Los Angeles. The left-hander yielded three hits, three runs and five walks in his seventh start for the Angels since they acquired him from Atlanta on Aug. 2.

Miller rebounded from his rough first and made it through four innings of nine-hit ball.

Angels: Patrick Sandoval (6-9, 3.03 ERA) makes the final start of his impressive hard-luck season Monday in Oakland to open the Halos' final series of the season.