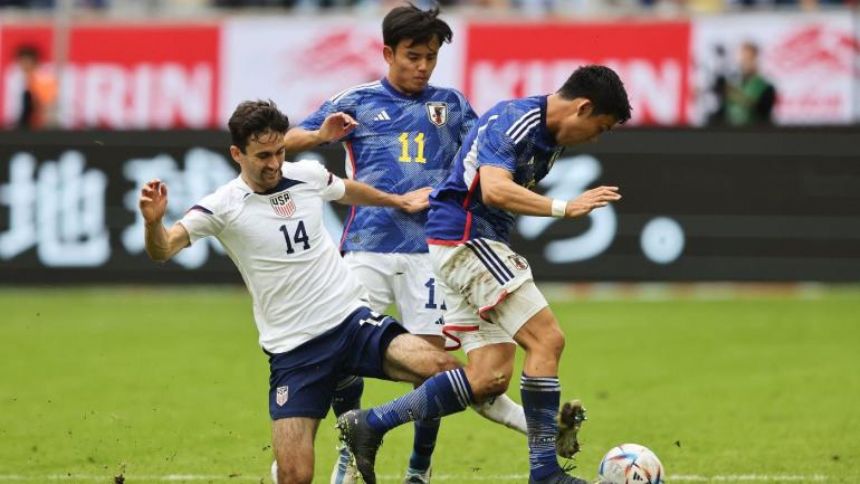 The United States men's national team'lost 2-0 to Japan in an uninspiring fashion to kick off their September international window. Goals from Daichi Kamada and Kaoru Mitoma were what made the difference for the Samurai Blue in a match where they outworked the United States in every phase of play. Keeping the USMNT from putting a shot on target is quite an accomplishment for Japan but it's a good time to look at reasons to worry or not as the team has one more friendly before their next match will be at the World Cup in Qatar.

Forwards: It didn't matter who played

It's weird to have a match where the team took four shots and put none on target and not to blame the number nine for the performance, but anyone leading the line outside of Erling Haaland and Robert Lewandowski likely wouldn't have made a difference in the match. Jordan Pefok would've brought a more physical presence than Jesus Ferreira but even when Walker Zimmerman tried to go route one during the match, it didn't matter. With only 14 touches in the half, Ferreira did the best he could to make something out of nothing by taking two shots, but the ball jus wasn't getting forward enough for it to make a difference.'

When Japan closed down Brenden Aaronson with their press, the team didn't have a counter to provide him with help. As one of the players who kept going for all 90 mintues, Aaronson is someone who showed that he deserved to be there but without Christian Pulisic or Tim Weah, there was no one to punish Japan's aggressive defense by running in behind. You can only go so far playing passes short when a defense can push their center backs way up the field because they know that no one can push the pace behind them to punish their agressiveness.

At most times, Sergino Dest was the furthest man forward as the United States employed a novel dribble to the corner and get stuck there approach to the match. Bringing in Jordan Morris is a fine option for closing out matches but it's another place where adjustments are needed because if he has to play 45 minutes or more at the World Cup, the USMNT will have issues. Switching things up at the half could've been an option but it's another match where Berhalter has stuck with his primary approach instead of adjusting to play around the opposition.

Who starts at center forward in Qatar remains a question mark, but despite the offensive struggles in this match, this one wasn't on the forwards.

After this performance, I never want to watch a national team game without Yunus Musah again. Luca de la Torre played like a midfielder who has only logged 11 minutes for their club this season. His performance was emblematic of a flat day from the midfield trio on the whole. While Berhalter did eventually remove de la Torre for Johnny Cardoso in the 67th minute, by then it was too late for him to make an impact. It's fair to question if Gio Reyna or Aaronson should have started at the ten but with Christian Pulisic also missing the match, Berhalter may not have wanted to use Paul Arriola on the wing.

Shifting the formation into more of a 4-2-3-1 could've given Japan something to think about, but missing the team's most press-resistant midfielder in Musah showed as no one created on the dribble. Berhalter did say that the team has work to do after that performance but when even regulars like Tyler Adams and Weston McKennie are getting muscled off the ball, it's a time where the team needs a plan b.

Things were better in the second half as passing got a little quicker to try playing around Japan since the team couldn't play through them, but that's tougher to do in the kind of neutral venues like where they played Friday and which the team will face in Qatar than it is to do when the United States are playing at home. In their toughest test not on home soil since drawing Mexico in March, this team needed to prove that they have the intensity to keep up in matches where they aren't on the front foot. They did not.

Musah's return will help with a lot but it won't fix every problem overnight so adjustments between this match and facing Saudi Arabia on Tuesday will be critical. Musah's return in November will help and Adams and Mckennie have the proven quality that the USMNT should rely on. Still, they need to be able to find solutions when things aren't working, and Friday they definitely did not.

I find it hard to rate the center back pairing during this match. It's true that both Walker Zimmerman and Aaron Long made mistakes during the match both giving away the ball and missing tackles but it's also true that their jobs were harder than they needed to be. Antonee Robinson's absence is quickly showing how important he is to the national team as his comfort defending extends over to his center back partner while his crosses into the box at least keep a team honest even though he rarely registers assists.

Sam Vines looked out of his depth and afraid to get forward in the first half and then got caught out of position in the second half. He doesn't have Joe Scally's recovery speed when he is beaten by an attacker, making things harder on Long and Mark McKenzie, who played the final 45 minutes. When the midfield is pressed off the ball, the entire defense is going to have a tough time and that was the case Friday. But with Robinson likely to return, depth is the biggest concern of this unit as well as playing time for Sergino Dest at AC Milan.

Dest had one of the brightest attacking moments when he was slipped into the final third but his attacking nature also helped lead to Japan's opening goal as he couldn't get back to defend his man. The hope is that the midfield will cover for Dest when he goes forward but that didn't happen with de la Torre in the match. Lack of communication between two regulars in the squad certainly isn't something that we want to see at this stage in the game.

Japan strikes first with a finish to the bottom corner! pic.twitter.com/qKVzVOzMoV

Coming in as a reserve Reggie Cannon didn't offer much either as he was beaten in a 1v1 situation for Japan's second goal which isn't great when there are four right backs in the squad. Berhalter knows what he has in DeAndre Yedlin and that could lead to Cannon being left off the plane to Qatar to bolster other positions.'

The bottom line here is that Long needs to show more as Zimmerman's primary center back partners and this team still doesn't have a capable Robinson backup on the left. Those are worrying issues.

Keeper: Cool as can be'

While Matt Turner's distribution couldn't get the team going, he was the only reason why Japan didn't win this game 5-0. Only completing two of 11 long balls isn't great but with how the attack performed, it is also understandable that Turner had issues with the ball at his feet. The USMNT were worked over by Japan's press impacting who he could get he ball to. When it came to protecting his net, Turner was stellar. Making six saves, he did what was asked of him and the two shots he was beaten on are tough ones to keep out due to how quickly the defense collapsed. A number one worthy performance from the only member of the team to stand out today.