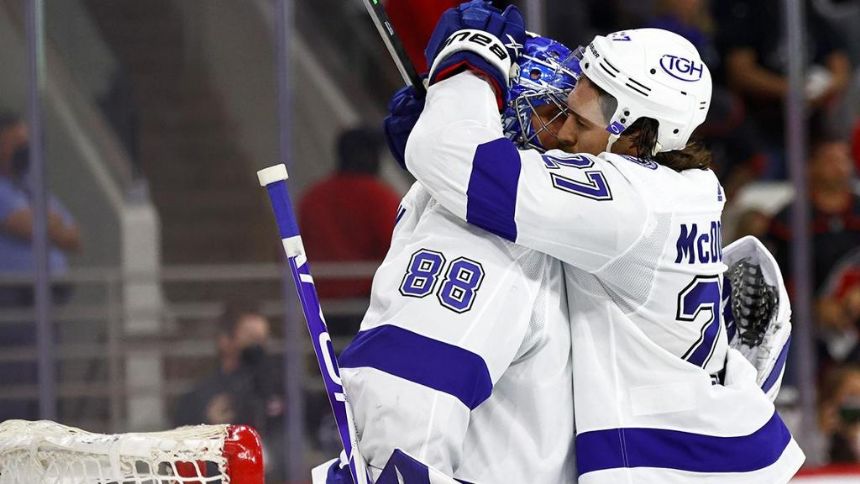 Vasilevskiy made a nifty first-period glove save on Claude Giroux's left-circle shot. The 2021 Conn Smythe Trophy winner as the playoffs MVP has a 199-86-22 career record. It was his first shutout this season and 27th overall.

Bogosian stopped a 62-game goal drought, dating to a goal against Detroit on Jan. 12, 2020 when he was with Buffalo. Perry got his 387th career goal after going 37 games without one.

Steven Stamkos had a goal and two assists for the Lightning, who have points in 11 of the last 12 games (9-1-2). Alex Barre-Boulet had the other goal and Bogosian added an assist.

Stamkos, with 493 points, moved past Martin St. Louis (491) for the most points at home by a Tampa Bay player.

Philadelphia's Carter Hart stopped 31 shots, including a number of strong saves. The Flyers have scored two or fewer goals in 10 of the last 12 games.

Bogosian opened the scoring from the top of the left circle 2:28 into the game.

Stamkos and Perry, from in-close, made it 3-0 in the second.

Barre-Boulet had a third-period goal.

Bogosian is hosting teammates and their families for Thanksgiving.

"My wife told me we were doing this," Bogosian said with a laugh. "I'm going to be cooking for way too many people."

Flyers D Keith Yandle played in his 939th consecutive game, and is 26 games away from passing Doug Jarvis for the longest streak in NHL history.

Flyers: C Derick Brassard left in the first with a lower-body injury. ... C Kevin Hayes (abdominal surgery) is week to week after being re-injured during his second game back on Nov. 16.

Flyers: Are at Florida Wednesday night.