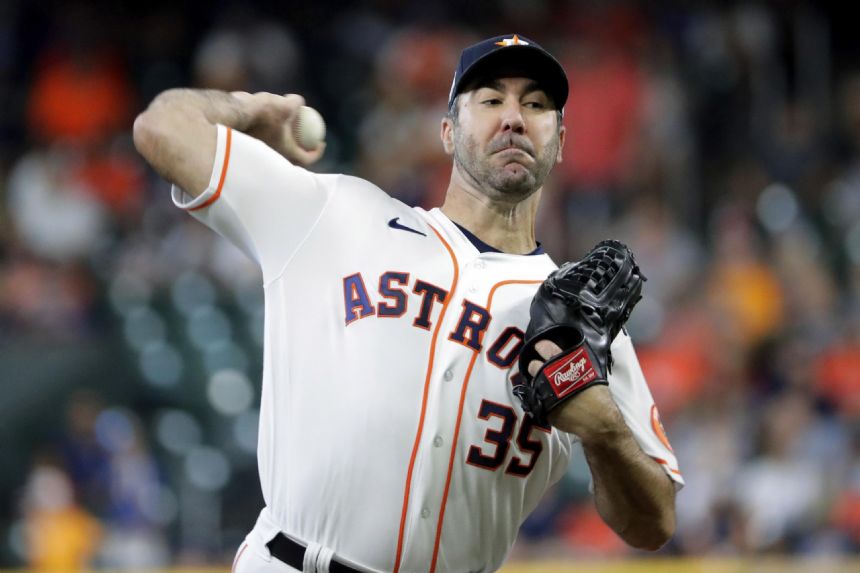 HOUSTON (AP) - Justin Verlander got his MLB-leading 11th win, Yordan Alvarez hit his 26th homer and the Houston Astros beat the Kansas City Royals 5-2 on Thursday to take the series 3-1.

Jose Altuve added a homer and three RBIs for the Astros, who bounced back after a 7-4 loss Wednesday night that snapped an eight-game winning streak.

Verlander (11-3) grinded through six innings, allowing seven hits and two runs - one earned - with eight strikeouts to lower his ERA to 2.00 in his remarkable return from Tommy John surgery. His ERA, opponent average (1.90) and WHIP (0.97) all rank second in the American League.

The Royals led 2-0 and Kris Bubic (1-6) had walked five batters but had allowed just one hit on a single by Jake Meyers in the second when Martin Maldonado doubled with one out in the fifth.

Altuve jumped on the first pitch of the at-bat, sending it into the seats in left field to tie it at 2-2.

There were two outs in the inning when Alvarez connected on his opposite-field shot to the first row in left field to put the Astros on top 3-2. His 26 home runs rank second in the AL to Yankees' star Aaron Judge, who has 30.

Houston added two insurance runs in the eighth on a sacrifice fly by Altuve and an RBI double by Aledmys Diaz.

Ryan Pressly pitched a scoreless ninth to get his 18th save.

The victory gives Verlander 24 wins all-time against the Royals, which is his most against any team and ties him with Nolan Ryan for fourth-most in league history against Kansas City.

The Royals led early in this one just as they had in the first three games of the series.

Emmanuel Rivera and Edward Olivares hit consecutive singles to start the second. Rivera was picked off trying to steal third for the second out of the inning before a single by Nicky Lopez scored Olivares to put Kansas City up 1-0.

Olivares got things going in the fourth when he singled with no outs and made it all the way to third on the play on an error by center fielder Jake Meyers. The Royals made it 2-0 when Olivares scored on a sacrifice fly by Kyle Isbel.

Verlander took a one-hopper hit by MJ Melendez off the leg with one out in the fifth. It didn't slow him down, as he chased the ball after it deflected off his leg and made the throw in time to beat Melendez to first.

Rivera singled to start the sixth before Verlander walked Isbel with one out. After a short visit to the mound, Verlander retired Lopez and Cam Gallagher on groundouts to preserve the lead and end his day.

Bubic yielded four hits and three runs while tying a career-high with six walks in 5 1/3 innings for his second straight loss.

Royals: INF Bobby Witt Jr. was out of the lineup for a second straight game after fouling a ball off his hand Tuesday night. He still had some swelling Thursday, but manager Mike Matheny said he expected Witt to hit in the cage and that he was still listed as day to day.

Astros: SS Jeremy Pena was scratched from the lineup about an hour before the game due to health and safety protocols.

Thursday's win was a milestone victory for manager Dusty Baker, moving him out of a tie with Walter Alston (2,040) into sole possession of ninth place on the all-time wins list with 2,041.

Astros: Jose Urquidy (7-3, 4.15) will oppose Oakland's Paul Blackburn (6-3, 2.90) when the Astros open a three-game series against the Athletics on Friday night.