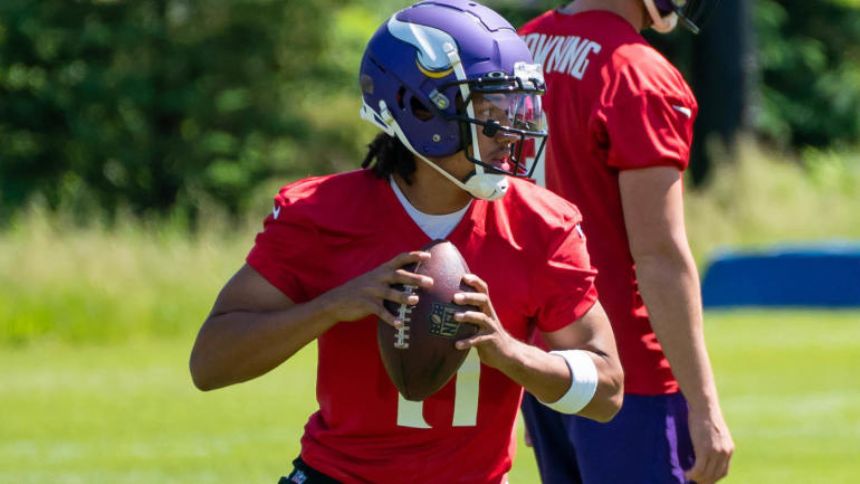 EAGAN, Minn. -- The sun was out in full force on Monday, as the Vikings began their first full week of training camp practice. It was a perfect template for the thousands of fans on hand at TCO Performance Center, giving local faithful a brightly lit look at the keys to Minnesota's 2022 season, both old and new.

For the first time in eight years, the team has a new head coach. For the first time in 10, it has a new general manager. The groundwork has already been laid for renewed hope in the Midwest. But what is camp revealing about the cautious optimism? As expected at the start of August, it's probably too early to tell.

Here are some key observations from Monday's walk-through and padded practice:

No surprise, but the Vikings' most explosive weapon is still lightning fast. The wide receiver's listed weight (195 pounds, down from 202 entering the NFL) may be a technicality, but he might be bursting off the line quicker than ever before. After showcasing a glitzy necklace during the morning walk-through, Jefferson showcased his separation skills in one-on-one drills, taunting rookie cornerback Andrew Booth Jr. after going deep. It's clear, from his own swagger and teammates' respect, he's at just 23, even with fan favorites like Adam Thielen and Harrison Smith still in town.

Several Vikings have already hinted that Mike Zimmer's departure as head coach will lead to a more contemporary offense, with less conservative leaning on the run, and more explosive passing. Others echoed the sentiment when discussing Kevin O'Connell's influence, coming from the Rams. The team is instituting "a lot more 11 personnel," featuring one running back and one tight end, veteran receiver K.J. Osborn told AP Sports, but the biggest change might revolve around how often the Vikings rotate personnel groupings: "There's 12 personnel, there's 21. He's so creative, with moving us around, with shifts and motions." O'Connell, as expected, was heavily involved with the offense at practice, matching new coordinator Wes Phillips in visible input.

Rotation at running back

The Vikings are paying handsomely for Dalvin Cook, now sporting the No. 4 from his college days, to be their lead back. And Cook, due almost $12 million in 2022, has answered the call with three straight 1,000-yard seasons. But Alexander Mattison, the fourth-year backup, rotated in with the starters throughout practice. He's been legitimate relief for Cook, topping 400 rushing yards in each of his three seasons, and envisions maybe his largest role yet: "I always go into the season with that mindset, if Dalvin so happens to land on a ball and can't catch his wind right away," Mattison told AP Sports. "Throughout this season, I think we'll have a healthy rotation -- a lot healthier this year than some previous years."

Cousins on point, Mond the new No. 2

Things weren't always smooth for the quarterbacks on Monday. Star linebacker Eric Kendricks undercut a short, rushed throw from Kirk Cousins in 11-on-11 drills to come up with a pick. Earlier, the QB's pitch to Cook, who wasn't fully ready, resulted in a fumble in the backfield. Second-year reserve Kellen Mond, meanwhile, fumbled a snap under center in full-team work. But both signal-callers finished the day on high notes. Cousins had pretty deep balls in two-minute drills, including a last-second touchdown, to fire up the offense. And Mond, a 2021 third-round pick, got most of the No. 2 reps ahead of Sean Mannion after spending almost his entire rookie season inactive.

New GM Kwesi Adofo-Mensah, who could've been mistaken for an inactive wide receiver while patrolling the sidelines in active wear, had his eyes on the restocked defense for good portions of the day. That might be where some of the team's most underrated strengths lie. Former Packers star Za'Darius Smith was an imposing presence working with the first-team linebackers in the new 3-4 scheme. In between snaps, he was working on a handshake with veteran cornerback Patrick Peterson, one of the few players to prevent a completion to Jefferson on the day. Former Eagles and Cardinals standout Jordan Hicks took all of the starting inside reps alongside Kendricks, with Cameron Dantzler manning the first-team corner slot opposite Peterson.