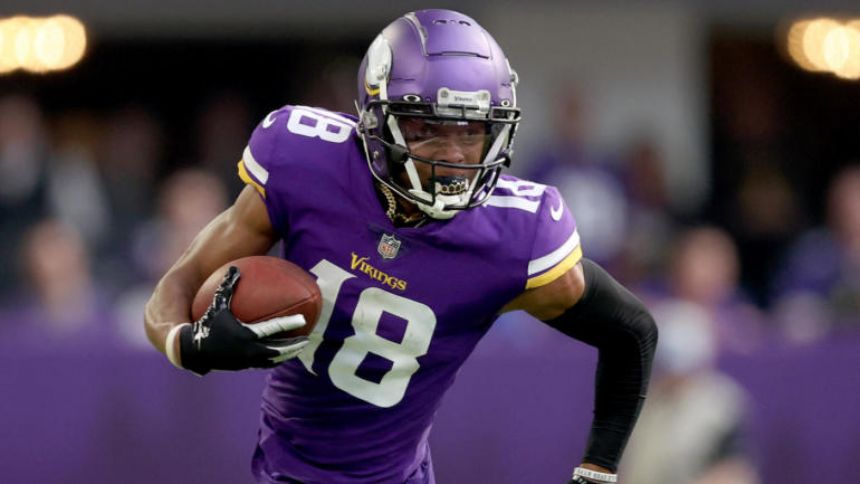 In a game that provides a fascinating clash of styles, the Philadelphia Eagles'play host to the Minnesota Vikings on Monday night. One of two "Monday Night Football" games this week, it's a matchup of two teams that secured Week 1 victories in impressive performances.'

The Eagles opened their season with a high-flying (sorry) win over the Detroit Lions, while the Vikings put the clamps on the division rival Green Bay Packers and kicked off the Kevin O'Connell era with a win. They each have a chance to remain unbeaten here, and join the New York Giants and Tampa Bay Buccaneers atop the NFC.'

Will the Eagles protect home field, or will the Vikings pull off an upset on the road? We'll find out soon enough. Before we break down the matchup, here's how you can watch the game.

When the Vikings have the ball

The Vikings finished with only 23 points in their Week 1 victory over the division rival Packers, but that undersells how well they performed offensively. Minnesota averaged 6.5 yards per play and posted the league's sixth-best EPA per play and seventh-best points per drive marks in the opening week.'

The Packers blew multiple coverages that led to big plays, and Kirk Cousins was able to step up and deliver the ball to those open receivers. He hit a huge play down the field to Justin Jefferson, making the type of off-platform throw across his body that we didn't see him to quite as often in the more buttoned-down offense the Vikings ran over the past few seasons. It was good to see Cousins let it loose, sliding up inside the pocket, and throwing back to his right even while drifting to his left.'

The Vikings did an excellent job of moving Jefferson around the formation in Week 1, repeatedly getting him matched up on linebackers and safeties rather than Green Bay's high-level corners. They'll surely want to do the same this week, trying to ensure that Jefferson sees a whole lot of Philadelphia's linebackers by lining up in the slot and running routes over the middle of the field. Philly wants to play a lot of zone on the back end just like Green Bay, so those opportunities should be there if they can find the right time for the right routes.'

Of course, Jefferson can also do plenty of damage on the perimeter. Those plays just take a bit longer to develop, and depend on Minnesota's offensive line holding up against a strong Eagles defensive front. If and when the Eagles sit in shell coverages, it might be time for the Vikings to get Irv Smith Jr. a bit more involved than he was last week. He did not play very many snaps after missing a bunch of the preseason with a thumb injury. Dalvin Cook should also be a good outlet on underneath routes, and his shiftiness provides a mismatch against Philly's linebackers.'

Last week, there was a marked difference in the way the Eagles defended the run based on how they aligned their defensive front. It wasn't just whether or not Jordan Davis was in the game (which played a big role), but whether they played three or four men along the defensive line and whether or not they dropped a safety down into the box. Philly would prefer to play light boxes and'still be able to stop the run, but that's easier said than done. If the Eagles come out with their four-man front and Davis is on the sideline, that might be the best opportunity to get Cook and Alexander Mattison going in the run game.'

Week 1's Eagles vs. Lions game turned into a bit of a track meet. In previous seasons, the Vikings did not want to get into that kind of contest. With a more aggressive, more pass-friendly offense under new head coach Kevin O'Connell, they might be more comfortable if this game turns out that way. Minnesota averaged a pass rate 2.1 percent over expectation in Week 1, according to TruMedia. The Vikes matched or exceeded that mark only nine times in the previous three seasons (so, 49 games) under Mike Zimmer. There is certainly enough firepower among this skill position group to score repeatedly, so they shouldn't be afraid to open things up and air it out.

When the Eagles have the ball

The Vikings played zone on 82 percent of Green Bay's passing plays last week. That was the seventh-highest rate in the league in Week 1. Those zones gave the Packers a ton of trouble, and limited their big plays down the field. Aaron Rodgers was 0-2 with an interception on throws of at least 20 air yards.'

Jalen Hurts surprisingly threw only one such pass against the Lions in the season opener, but last year he had the second-highest deep throw rate in the league. Will he be willing to take the underneath stuff that the Vikings encourage, or will he try to push the ball down the field even if the opportunities aren't there for him? After A.J. Brown had a monster game in Week 1, it might be more of a Dallas Goedert-and-Kenneth Gainwell type of week, given the style of defense Minnesota plays. Whether or not the Eagles can move the ball as well with those guys as they did with Brown (and Hurts scrambling) will be interesting to watch.'

With Minnesota playing zone much more often than man, it also bears watching how often Hurts is even given the opportunity to take off and run. It is typically easier to do so when the opponent plays man coverage, because second-level defenders do not have their eyes on the quarterback. In zone, everyone is typically facing forward toward the line of scrimmage, and can come up and make a tackle if the quarterback decides to run with the ball instead of throwing it. Defensive coordinator Ed Donatell comes from the Vic Fangio coaching tree, and has brought with him a lot of the concepts that are sweeping through the league. When executed correctly, they provide an opportunity to keep Hurts boxed into being a passer when he drops back -- even if nobody springs open.'

Of course, that style of defense also encourages the opponent to run the ball more often, and the Eagles run the ball better than almost any team in the league. Their offensive line is maybe the NFL's best. Hurts is not just a great scrambler, but also extremely effective on designed runs. They have Miles Sanders, Gainwell, and Boston Scott to knife through the heart of the defense if it pays too much attention to the threat of Hurts getting to the perimeter.'

Minnesota's defensive front will have its work cut out for it against the Eagles' offensive line. Aaron Jones and AJ Dillon actually ran it pretty well against the Vikings last week when they got the opportunity, so there might be some room for Philly to do the same in this matchup. If they can find success, that should open things up for Brown and company on crossing routes, and there are few players better at doing work after the catch when they get the ball on the move.