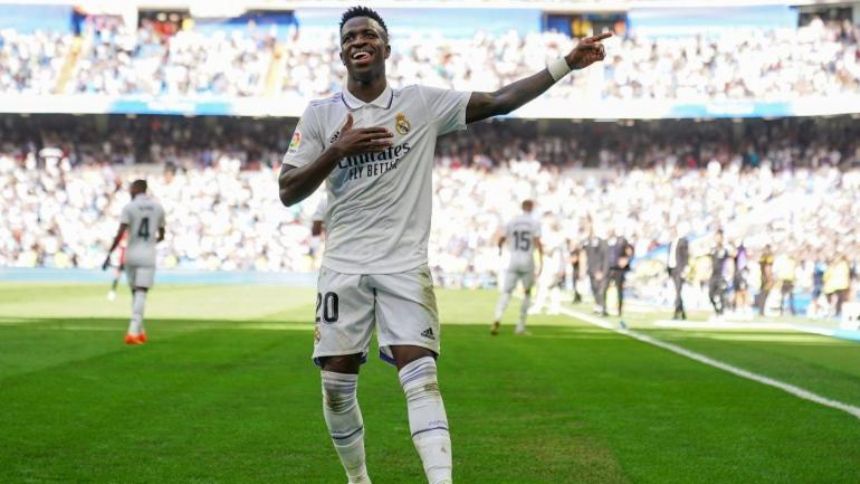 The Madrid derby between Real Madrid and Atletico Madrid is a heated affair on the pitch, but sometimes the rivalry can spill off the field as well. Speaking on Friday, Atletico Madrid captain Koke said that Real Madrid star Vinicius Junior can expect trouble if he dances after scoring. Koke did follow up by saying that, "If in the end he scores and decides to dance, well it's what he wants to do. Would I understand it or not, everyone has their own way of being and of celebrating goals as they come please"

While that's a contradictory statement from Koke, the spark was already lit as Carlo Ancelotti chimed in on the the burgeoning spat. "He is a Brazilian, he dances very well, and I don't think it bothers anyone," Ancelotti said. "He doesn't need to change anything regarding his attitude because he respects his rivals and the referee a lot."

Looking at some of Vini Jr's dances it's easy to see why they could rile up the opposition but if Koke doesn't want him to dance, the best way to do that is to not let him score.

Considering that Atletico Madrid are currently seventh in La Liga, Koke's focus should be on the match and stopping Vini Jr instead of celebrations if he scores because the team needs at least a point in this important derby match. Not to mention that Koke's own teammate Antoine Griezmann is known for his own celebratory dances as well showing the double standards from the Atleti captain.

When Griezmann danced at the Bernabeu and there was no trouble... pic.twitter.com/8oxgcpdFxJ

While teams arguing about whether celebrations are disrespectful is a pretty normal part of rivalries, things took a somewhat more serious turn as the public war of words kept on rolling. The President of the Spanish Agents association Pedro Bravo told Vini Jr. to, "stop playing like a monkey.: Bravo did retract the statement but Vini Jr responded as Koke's comments began to take on a life of their own with others chiming in.

"They say that happiness bothers. The happiness of a victorious black Brazilian in Europe bothers much more. But my desire to win, my smile, and the sparkle in my eyes are much bigger than that. You can't even imagine it. I was a victim of a xenophobic and racist comment. But none of that started yesterday. Weeks ago, they began to criminalize my dances. Dances that are not mine," Vini Jr said in a personal statement. "They belong to Ronaldinho, Neymar, [Lucas] Paqueta, [Antoine] Griezmann, Joao Felix, Matheus Cunha... they belong to Brazilian funk and samba artists, reggaeton singers, and black Americans. Those are dances to celebrate the cultural diversity of the world. Accept it, respect it. I'm not going to stop."

After online abuse that Marcus Rashford, Bukayo Saka, and many other black soccer players have received none of this comes as a surprise but it's still saddening to see. Real Madrid released a statement in support of Vini Jr and calling out all types of racist and xenophobic language but these shouldn't be needed in 2022.

It's clear that Vini Jr is having fun when he plays soccer and it shows both in his playing style as he dribbles past defenders with a smile on his face as well as his celebrations when scoring. The game is better with players like Vini Jr. expressing themselves as it shouldn't be stifled if the expression is in good faith. But when your star shines as brightly as Vini Jr's does, everyone from opposing coaches to players are looking to stop you.'

One of the other events that Vini Jr. was referring to is RCD Mallorca's coach Javier Aguirre reportedly saying, "hit him, kick him" after Vini Jr.'s celebrations against them.

??? Mallorca's coach yelled "hit him, kick him" to his players, which is why Vinicius went to argue with him. Nacho, Kroos, Ancelotti tried to calm him down. @ElDiaDespues #rmalive

With five goals and three assists in only eight matches, Vini Jr. has had plenty of chances to celebrate this season as his Real Madrid team has won every game that they've been involved in ahead of Sunday's Madrid Derby, so celebrations aren't hurting the team one bit. Don't like them, then stop Los Blancos from winning matches.