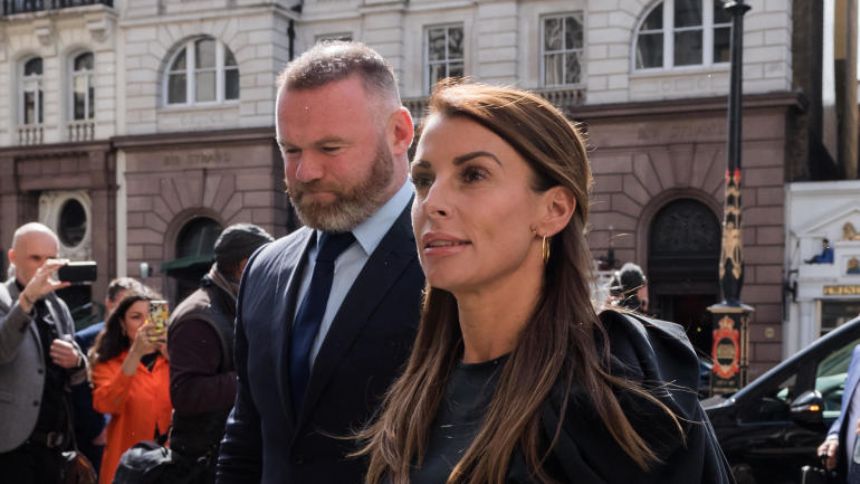 It is the trial that has captivated the United Kingdom, sitting at an intersection between the obsessions of celebrity culture, Premier League football and the ancient institutions of British society that no one could have imagined existed. This is the :Wagatha Christie" trial, two and a half years in the making and certain to get its own premium streaming miniseries in much less time.

Rebekah Vardy, wife of former England striker Jamie Vardy, is suing Coleen Rooney, wife of former England striker Wayne Rooney, for libel. For the truly uninitiated, they're the "WAGs" or "wives and girlfriends" in the Wagatha Christie portmanteau. The thoroughly modern world of Instagram stories, ridicule behind each other's backs on WhatsApp and the indignation that comes with being unfollowed on social media has come crashing into the Royal Courts of Justice. No one can look away.

So, how did we get here?

Let us journey back to the halcyon days of 2019, when coronavirus was indeed a novel concept and Wayne Rooney was rolling back the years with D.C. United in MLS. Across the pond, his wife was concerned. Someone had been leaking stories about her to The Sun newspaper. One might consider this an occupational hazard for Coleen Rooney, Wayne's childhood sweetheart, who has spent more of her life in the tabloid spotlight than out of it but she had understandably had quite enough of her private business being splashed across the tabloids.

Over five months Rooney carried out what she termed a "sting operation," blocking everyone bar one account from viewing her Instagram stories. From there she posted "a series of false stories to see if they made their way into the newspaper." Lo and behold, she said, some did: a possible appearance on Strictly Come Dancing, a flooded mansion, a trip to Mexico. That was enough. She believed she knew "for certain" who was responsible. Only three ellipses were sufficient to convey the tension as she revealed.

"It's.......... Rebekah Vardy's account." The internet was soon ablaze and Wagatha Christie was born. Vardy has been adamant ever since that she was not the leak, noting that others had access to her Instagram account, among them a PR agency and an advertising agency, and suggesting that if Rooney had been in contact beforehand she could have changed the password.

This has been a burden in my life for a few years now and finally I have got to the bottom of it...... pic.twitter.com/0YqJAoXuK1

Neither party backed down. When the Daily Mail asked Vardy whether she had argued with Rooney, she said, "That would be like arguing with a pigeon. You can tell it that you are right and it is wrong, but it's still going to s*** in your hair."'

In that same interview she added, "I think it's gone beyond an apology, hasn't it?"

The lawyers get involved

In July 2020 Vardy filed a libel claim against Rooney, alleging that the claims made against her had caused "extreme distress, hurt, anxiety and embarrassment." In a preliminary hearing in November 2020, Justice Mark Warby concluded that Rooney's statement that the leak had been "Rebekah Vardy's account" constituted a direct accusation against the 40-year-old.'

Both parties racked up their costs over subsequent hearings, ending this week in the High Court as both sides refused to agree to a settlement that would have saved them money. For Vardy, her lawyers said 18 months ago, this is about "vindicat[ing] her reputation."

The latest from the trial

On Thursday, Vardy underwent her third day of cross examination as Rooney's lawyer David Sherborne attempted to prove that she was personally responsible for leaking stories. English libel law requires Rooney to prove that it was specifically Vardy who leaked the stories or to convince the judge, Justice Karen Steyn, that her revelation was in the public interest.

With much of the communication history between Vardy and her agent Caroline Watt having disappeared (more on that later), Rooney's team have suggested that she was lying about the extent of her relationship with the press. Vardy has admitted that she attempted to leak a story about her husband's then Leicester teammate Danny Drinkwater being arrested for drunk driving, but she insisted it was a one off.'

Rooney's lawyers also questioned her on an interview she had given with the News of the World in 2004 in which she revealed that pop star Peter Andre was "hung like a small chipolata," comments she said she "deeply regrets." They also suggested that Vardy had instructed her agent Caroline Watt to leak stories about another then Leicester, now Manchester City player, Riyad Mahrez, having missed training.'

Messages exchanged between the two showed that Watt had suggested leaking the story to a Sky Sports reporter, with Vardy replying that she didn't want it "coming back on me." When Watt said, "I can tell someone" Vardy said, "do it."

Vardy said she had been "gossiping about things that were already in the public domain." Watt, meanwhile, has been deemed not healthy enough to give evidence.

Sherbourne said that it was not apparent whether Watt had indeed leaked the news as her phone is now lying at the bottom of the North Sea. As Rooney's lawyer put it, last summer the "poor unfortunate phone" belonging to Vardy's agent had fallen overboard "within days" of his team requesting to examine it.'

Rooney's lawyer claims WhatsApp messages that would show the leaking of stories to the Sun are on a phone dropped off the side of a boat. He says it is now "lying at the bottom of sea in Davy Jones' locker".

Vardy asks the court: "Who is Davy Jones?"

Meanwhile Vardy herself is unable to access her WhatsApp messages after an IT expert charged with backing them up lost the password. Husband Jamie Vardy's WhatsApp was also hacked.

Sherbourne alleged in written submissions that Vardy and her team had engaged in a "deliberate and calculated" effort to dispose of evidence. Vardy's lawyers, led by Hugh Tomlison, described the claim as "completely baseless". "There is no such campaign of deletion," they said. "The reason there is no direct evidence against Mrs Vardy is because she didn't do it."

The trial entered into the third of seven days set aside for it on Thursday with Rooney expected to give evidence next. Her husband Wayne could also take the stand before Steyn delivers her verdict.

For the winner their hefty bill will at least come with a slice of vindication on the side. Whoever is unsuccessful will have only their lawyers' fees for company.