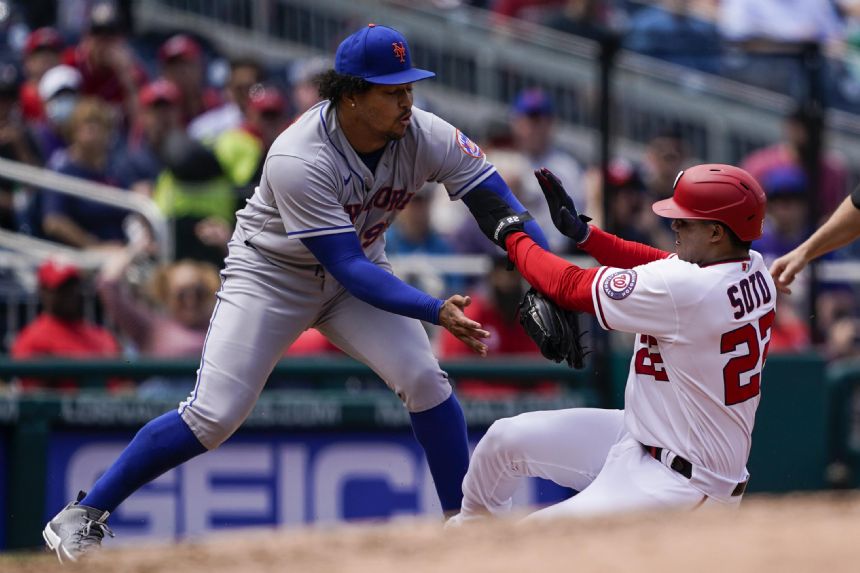 Mark Canha went 3 for 4 with a homer and three RBIs for the NL East-leading Mets, who took two of three from the last-place Nationals. New York has won nine series and split one, and hasn't lost two straight games in a month.

Walker (1-0) allowed three hits, walked one and threw 85 pitches in the longest of his four starts this season, which was interrupted by a stint on the injured list with right shoulder bursitis.

Walker benefitted from a bizarre double play that kept Washington from scoring. Seth Lugo struck out two in the eighth and Edwin Diaz allowed Juan Soto's two-out homer in the ninth before retiring Josh Bell to complete the four-hitter.

The Mets only managed five hits, but they went ahead 2-0 in the first inning on Canha's bases-loaded single and Washington never seriously threatened. New York took advantage of wild Nationals starter Joan Adon (1-6), who walked five of the first 10 batters he faced.

Tomas Nido added a run-scoring single with two outs in the fourth that chased Adon, who also hit J.D. Davis in the back with a fastball - the 24th time a Mets batter has been hit this season, which leads the majors.

Soto opened the fourth with a double off the wall in right-center but quickly ended the Nats' best scoring chance with poor baserunning. Soto broke for third on a grounder to the left side by Josh Bell and was caught in a rundown before being thrown out at third. Walker tagged Soto and threw wildly to second, and Bell tried to advance and was thrown out at third.

Canha homered in the ninth off Steve Cishek.

Mets: C James McCann was held out of the lineup with a sore left wrist.

Nationals: SS Alcides Escobar missed a third straight game with infection under the nail on his left index finger. Manager Dave Martinez said the finger has been drained multiple times but Escobar is not expected to go on the injured list.

Nationals: Josiah Gray (4-2, 3.45) starts the opener of a weekend series against Houston.