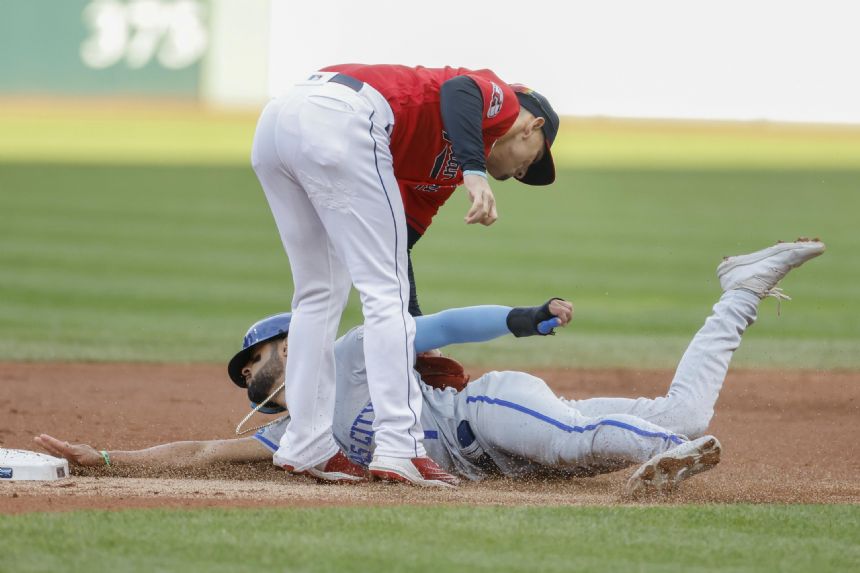 Waters' third home run in four games landed on the porch in left field, scoring automatic runner Nicky Lopez and Michael A. Taylor. The 23-year-old outfielder went 2 for 4 with four RBIs as Kansas City won for the second time in seven games.

Cleveland has won 11 of 14 and is an MLB-best 22-6 since Sept. 5. The Guardians will host either Tampa Bay or Seattle in a best-of-three wild-card series beginning Friday.

Bobby Witt Jr. singled and stole his AL rookie-best 30th base for Kansas City, but also committed a fielding error in the sixth that permitted Cleveland to tie the game.

Oscar Gonzalez and Will Brennan had two hits apiece for the Guardians. Brennan is batting .351 with one homer and seven RBIs in 10 games since his Sept. 21 recall from Triple-A Columbus.

Royals right-hander Zack Greinke, who will be a free agent following the season, pitched six innings, allowing one earned run and one unearned run. The 39-year-old struck out one and had three wild pitches, remaining winless on the road since Aug. 13, 2021.

Greinke ranks 20th all-time with 2,882 strikeouts and is tied for 73rd with 223 wins. The six-time Gold Glove recipient also made a great defensive play, stabbing a liner by Owen Miller that was headed for his face.

Triston McKenzie, who will start the second game of the wild-card series for Cleveland, allowed one run in five innings. The right-hander struck out four without a walk, completing his regular season with an 11-11 record and 2.96 ERA.

The Royals took a 1-0 lead in the second on an infield single by Waters. Edward Olivares came home due to non-communication between McKenzie and Miller.

AL Rookie of the Month Steven Kwan drove in Gabriel Arias in the third for the equalizer. Utility infielder Arias made an error for the fourth consecutive game.

Each team scored once in the sixth. A sacrifice fly by Michael Massey plated Witt in the top half, while Gonzalez raced in from third when Witt fumbled Arias' grounder.

ONE OF A KIND

Former AL Cy Young winner Greinke, who broke into the majors with Kansas City in 2004, signed a one-year contract on March 16. He made his 500th career start on June 29 against Texas and threw his 50,000th pitch on July 10 against Cleveland.

Known for his eccentricities, Greinke roamed the field in shorts, an oversized long-sleeve shirt and high socks on the chilly, windy afternoon.

"Zack is so unique and so real because he's not trying to impress anybody," manager Mike Matheny said. "The young guys have used him as a resource, but the thing with him is, you better be careful what you ask because he'll tell you."

Royals: C Salvador Perez (left thumb soreness) missed his second straight game after feeling discomfort in his surgically repaired thumb Saturday. Matheny said the seven-time All-Star is being monitored and has not been ruled out for the year.

Royals: LHP Daniel Lynch (4-12, 4.96 ERA) seeks his first victory in his fifth career start against the Guardians. Lynch is 0-2 with an 8.66 ERA against Cleveland, including an 8-3 road loss on May 31 in which he allowed six runs in four innings.