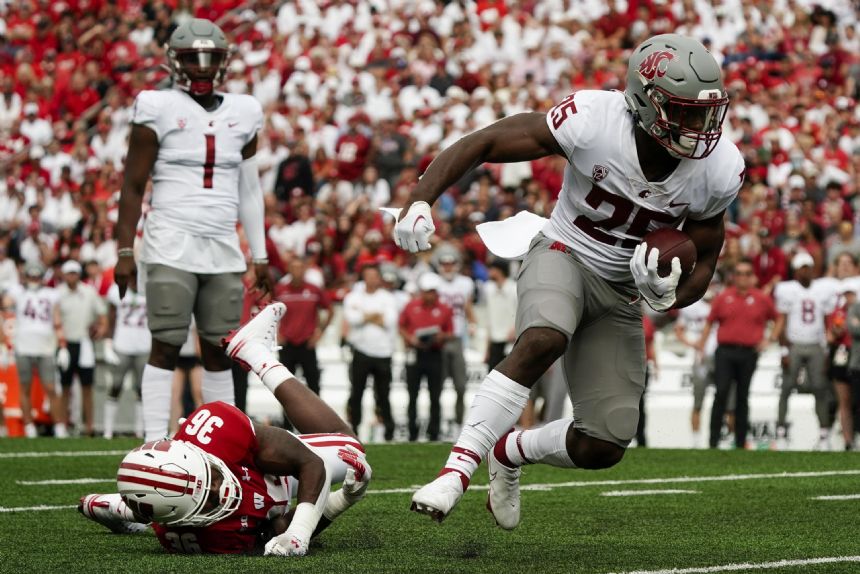 Watson scored on a 2-yard run in the second quarter and put the Cougars (2-0) ahead for good by turning a short completion into a 31-yard score with 5:12 left in the third quarter. Watson rushed for 522 yards and five touchdowns at Wisconsin from 2019-20 before transferring.

A game that featured three turnovers by each team and multiple bizarre plays produced a happy homecoming for Washington State coach Jake Dickert.

Dickert was born in the Milwaukee suburb of Waukesha, Wisconsin, about 65 miles east of Camp Randall Stadium. Dickert played for Wisconsin-Stevens Point from 2002-06, and about 200 friends and relatives gathered for a pregame tailgate Saturday.

This game featured two separate plays in which one team intercepted a pass and then fumbled the ball away, creating a first down for the team that threw the pick.

Wisconsin (1-1) trailed 17-14 and faced third-and-6 from the Washington State 9 midway through the fourth quarter when defensive tackle Christian Mejia picked off a Graham Mertz pass before losing the football. Wisconsin recovered at the Washington State 20, but a personal foul on Badgers tight end Clay Cundiff after the play pushed them back to the 35.

Cundiff then caught a 24-yard pass, but Quinn Roff forced a fumble that Sam Lockett III recovered at the 12 with 5:14 left.

Washington State never gave up possession the rest of the way.

Wisconsin's two touchdowns came in the second quarter on passes from Mertz to Cundiff. They connected on a 17-yarder and a 10-yarder, the latter coming 20 seconds before halftime.

These were Cundiff's first touchdowns since the tight end dislocated his right ankle, broke a fibula and tore a foot ligament in a victory over Iowa last October. His first game back from that injury came in Wisconsin's 38-0 victory over Illinois State last year.

The Cougars trailed 14-10 and had third and 10 from their 47 when Ward was hit by Kamo'I Latu just as he threw a pass that Wisconsin's Jay Shaw picked off. Washington State receiver Lincoln Victor then applied a hit that knocked the ball loose, and center Konner Gomness recovered the fumble at the Wisconsin 49.

Instead of losing the ball on the turnover, Washington State suddenly had a first down just beyond midfield.

Six plays later, Watson caught a pass just beyond the line of scrimmage, made a spin move to get past Latu at the 30 and raced untouched the rest of the way for a 31-yard touchdown that put the Cougars ahead 17-14.

Wisconsin: The Badgers controlled the ball for over 38 minutes but committed 11 penalties and two missed field-goal attempts.

Wisconsin figures to fall out of the poll, while Washington State should at least get some votes.