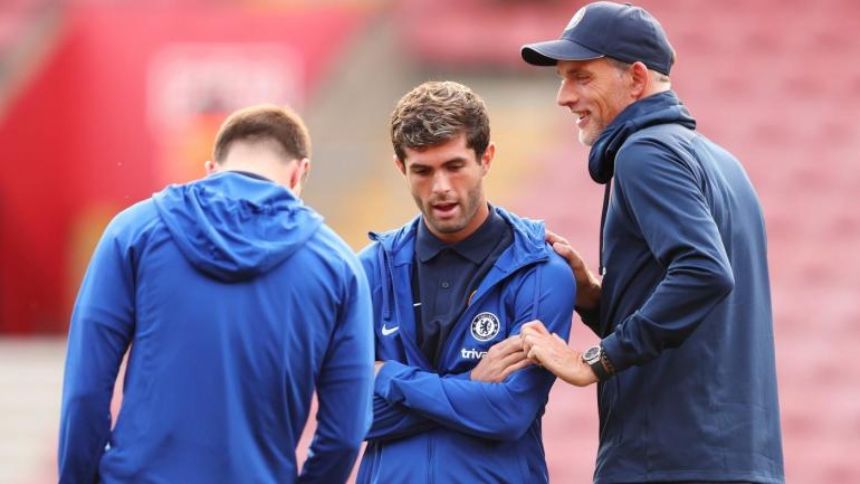 The transfer window for the big five leagues in Europe has come and gone. On the American front now that the 6 p.m. ET deadline is behind us,' and 'captured most of the attention as due to their imperfect situations at and , respectively. Pulisic did not get his desired move away from the club despite all the signings the Blues made while Dest sealed a .'

Both have struggled to make any type of significant impact at their clubs with Dest seemingly exiled by a manager in that clearly thought he didn't have the chops to play for the club. He now goes to Italy in search for more playing time. Pulisic is often being used as a wingback and hardly enjoying life in London after being relegated to the bench for every Premier League game thus far this season.'

So let's break down what's went down, what their current/new situation means in the build-up to the 2022 World Cup in Qatar and much more:

Pulisic: It's been rough sledding for the Pennsylvania native. He's not even in the category of impact sub anymore for the Blues as he simply hasn't been making a difference. Chelsea have played five Premier League games and Pulisic has not started any of them. In fact, he's played a total of 95 minutes, completed a woeful 71.4% of his passes and failed to get a single shot on goal. What's just as concerning is this is a Chelsea attack struggling for consistency, looking for somebody not named to do something. -- and not Pulisic -- might be the answer to their problems, unfortunately.

Dest: If you though things were bad for Pulisic, the outlook was much dire for Dest at Barcelona before he was moved to Milan. The Dutch-born U.S. international hasn't played a meaningful game since April as he has been unused by Xavi thus far this season. Heck, he can't even make the bench. The only minutes he logged were in uncompetitive games, namely the charity friendly against last month, and that appearance was by way of a late sub in the 81st minute. He was seemingly removed from contention for the first team, which is why a move to Milan made so much sense.

Pulisic: The most serious suitor for Pulisic , though there were links to Newcastle, and AC Milan. Any of those situations would have been better than the current one. Yet in the end, nothing materialized.

Dest:'Manchester United and former manager Ajax Erik ten Hag expressed some interest while were also rumored to be interested. In the end, it was AC Milan and the lure of playing in the Champions League was enough to convince him.

Why only one found change of scenery

Pulisic: He quietly tried to find a change of scenery behind the scenes, but Chelsea refused to consider loan proposals and in the end chose to keep him, according to'The Athletic. The report suggested that Todd Boehly, the new American owner who just took over the team not too long ago, decided against the thought of a departure, despite wishes from the USMNT star to leave.'

Dest: Barca's complicated financial situation, large in part due to excessive spending on transfers and salaries in recent years, has forced them to be more flexible when making these moves. They've spent so much money in the offseason that it prevented them from registering star defensive signing to begin the season in La Liga. So at this point, any time they can get rid of a player that they aren't counting on, it's a beneficial situation for the Spanish side. It appeared that he would stay after any move to United failed to materialize, but it always made sense to move somebody who the manager isn't even considering playing.'

Pulisic: Tuchel, just this week, basically hinted how easy it was to pick his starting XI. In theory, that sounds great, right? Well, in this instance, no.

"I would love to have a headache about who plays and who is on the bench. There are not enough tough decisions at the moment. I would like to have more of these. That would mean we are in full competition mode," Tuchel told the media.

What that means is that there is not enough depth to push his current starters, to create healthy competition. Whether this means Pulisic isn't showing enough in training is unclear, but what is clear is that he isn't showing the manager enough to warrant playing time. Considering Chelsea's inauspicious start, that's a sign of concern from Pulisic's point of view. The Blues have won just two of their first five league games.

Dest: What Dest's manager is saying is even worse. Just last month, Xavi said that Dest knows how he feels, and it clearly isn't positive. That's evident by the manager saying he prefers for two center backs or a midfielder to play that right-back position.

"At right back, we have Sergi [Roberto] and Dest, but he knows the situation of the club and my stance toward him," Xavi told the media.

"Sergi, Ronald [Araujo] or Jules [Kounde] will have to play. The intention of the club is to strengthen the right back spot."

With Barca reportedly set to sign Hector Bellerin, it was an even easier decision to let Dest go to Milan.

Pulisic: men's national team manager Gregg Berhalter acknowledged Pulisic's situation at Chelsea but feels like he will deliver when given the chance, as he has manager to do at points in the past.

"He is not counted on in a way that he'd like to, and he gets on the field and he proves everyone wrong and he ends up playing," Berhalter said, according to the AP. "I mean that's what he's been doing. So I tend to believe that's going to happen. And I think his mind is in a good spot and I think he's going to fight for it because that's the type of guy he is."

Dest: Berhalter seemed more concerned with Dest's situation at Barcelona, saying the players need to to playing and in form ahead of the World Cup. That wasn't going to happen at Barca.'

"I've talked to Sergino, and one thing I would say about him is he has a great mentality. He has a fighter's mentality, which you want him to have," Berhalter told "Extra Time" host Andrew Wiebe before the move to Milan.'

"You want him to be realistic ... It is important that we have our players in form playing. It's not easy, man.

Pulisic: It doesn't matter much. If anything, it might mean he is fresher and injury-free when the tournament kicks off in November. Even if he was getting zero minutes a match, he'd still be on the plane to . There is something to be said about entering a cup playing well, but for Pulisic, he knows his spot as the star of the team is there and he'll play barring injury. The confidence is what will need to be there if he's not getting regular minutes.

Dest: Dest's situation is somewhat similar in that he's a clear starter for the national team, but getting minutes to develop and grow your game is so important. He is a below-average defender who lacks the discipline to be an impactful player on that end. You could argue he'd be better served as a winger, which we saw with Barca a little last season. But playing in a defensive league like Serie A could be good for his development, and most importantly, vital for his confidence.'