What to Watch: Rivalries with consequences take center stage 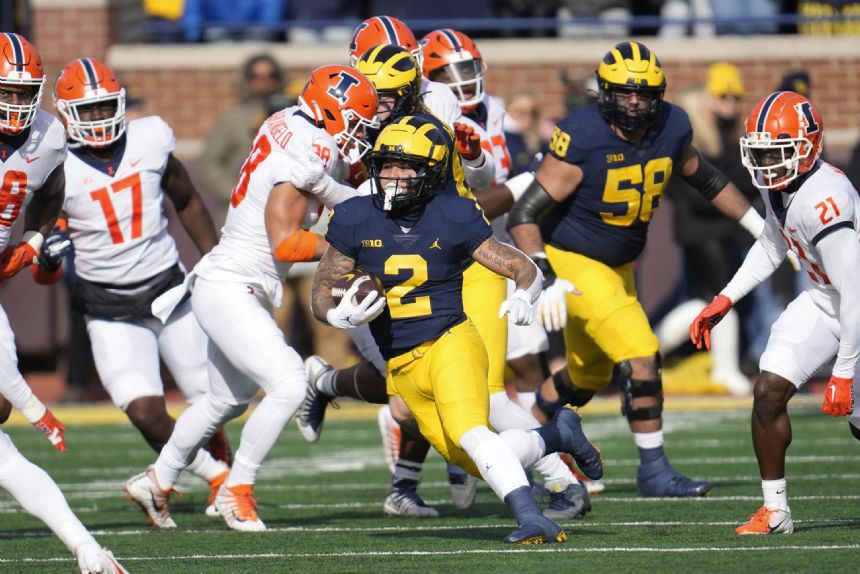 Rivalries are the soup of the day as college football heads into its final weekend of the regular season, and spots in the College Football Playoff are likely there for the taking.

The marquee matchups with playoff implications include No. 3 Michigan at No. 2 Ohio State and No. 13 Notre Dame at No. 5 Southern California, but there are others, beginning Thanksgiving night.

That's when No. 20 Mississippi (8-3) plays at Mississippi State (7-4) in the 95th "Battle for the Golden Egg." The Bulldogs will be looking to snap a two-game skid in the series.

Ohio State had won eight straight and 15 of 16 matchups with the Wolverines before Michigan coach Jim Harbaugh got his first win in six tries in the series last year. The game marks the 12th time the programs have met with both ranked in the AP Top 25's top five.

USC's first season under Lincoln Riley finds the Trojans in the top five for the first time in five years, and earned them a berth in the Pac-12 championship game. The Fighting Irish have lost three, but they've also beaten the Atlantic Coast Conference standard-bearers for this season, Clemson and the Tar Heels, who will play for the ACC title.

The What to Watch rundown in college football presented by Regions Bank:

The Buckeyes' dominance in the series notwithstanding, Michigan can likley lock up a second consecutive berth in the CFP with a victory. The Wolverines lead the series 59-52-6, but they've lost their last nine visits to Ohio Stadium.

Michigan RB Blake Corum took himself out of last weekend's victory against Illinois, but said he'll be ready to go. He's third nationally with 1,457 yards and tied for the lead with 19 touchdowns. Buckeyes QB C.J. Stroud shares the national lead with 35 touchdown passes, including 11 to Marvin Harrison Jr., and eight to Emeka Egbuka.

Tennessee QB Hendon Hooker will no longer be in the discussion after a bad loss at South Carolina and a torn ACL that ended his season, putting the spotlight squarely on what happens in Columbus, Ohio. Stroud or Corum could burnish their credentials with a win Saturday. Then there's late comer Caleb Williams: The QB accounted for 503 yards of offense and three touchdowns in USC's 48-45 victory against UCLA. He's thrown for 33 touchdowns with just three interceptions.

Michigan has won 23 games over the last two seasons, more than in any two-year stretch in program history. ... No. 4 TCU (11-0) has beaten four teams it lost to by at least two scores last season. The Horned Frogs also are the first Big 12 team to be 11-0 since Texas in 2009. ... Ole Miss is the only FBS team with more than 5,000 yards of offense and at least 2,500 on the ground. ... The Notre Dame-USC matchup marks the first time both teams were ranked going into the game since 2017. ... North Carolina is the first two-time winner of the ACC's Coastal Division; all seven programs won one of the first seven.

Things were looking great for Syracuse and coach Dino Babers when the Orange started 6-0 and climbed to No. 14 in the Top 25, but when they face Boston College on Saturday, they'll be trying to avoid becoming the third team start 6-0 and finish 6-6 before a bowl game. Babers' team has sustained significant injuries on defense and with QB Garrett Schrader, but joining Illinois (2011) and Baylor (2016) as teams that went from 6-0 to 6-6 might not bode well for his future, especially with a career mark at Syracuse of 35-48.

South Carolina has another chance to disrupt the CFP this weekend when t he Gamecocks visit No. 7 Clemson. Coach Shane Beamer's team (7-4) last week eliminated No. 9 Tennessee from contention with a 63-38 victory, enhancing their bowl prospects. The Tigers have an outside chance to enter the CFP conversation with some help. ___