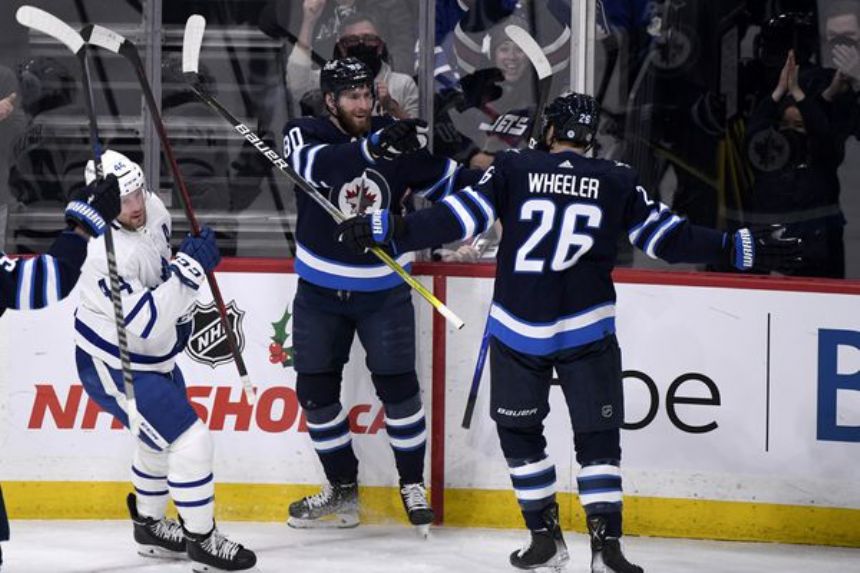 WINNIPEG, Manitoba (AP) - Blake Wheeler had two assists in his 1,000th NHL game and Connor Hellebuyck made 32 saves, leading the Winnipeg Jets to a 6-3 win over the Toronto Maple Leafs on Sunday night.

Wheeler helped get the Jets on the board first with a nifty pass on the power play to Dubois, who was all alone in front of the Leafs net. His deke beat Woll, the Leafs' backup, at 4:05 to give the home side a 1-0 lead. It was his 12th goal of the season.

Dubois then took an offensive zone penalty as he tripped up David Kampf, sending the Leafs to the power play. Toronto didn't do much for most of the man advantage, but Pierre Engvall found Bunting in the Jets' slot and his wrist shot beat Hellebuyck at 16:08.

The Jets regained the lead before the second period was two minutes old when defenseman Neil Pionk hit Copp with a pass and he beat Woll on a partial breakaway.

The Jets doubled their lead just a few shifts later as Dominic Toninato found Svechnikov on a 2-on-1 and his wrist shot beat Woll high to the blocker side. It was his second goal of the season.

The Jets went back to the power play a few minutes later. Connor put the Jets ahead 4-1 when his shot from the right dot beat Woll at 7:38. It was his 15th of the season.

Ehlers converted Copp's pass for his ninth of the season to give the Jets a 5-1 lead. It was Winnipeg's fourth goal in less than nine minutes.

Wheeler's tripping penalty on Rasmus Sandin at 13:28 of the second period put the Jets down two men and Matthews made him pay. His wrist shot from the top of the circle beat Hellebuyck just underneath the crossbar 52 seconds later to make it 5-2.

The Leafs still had the power play but couldn't capitalize. A seconds after the man advantage expired, they pulled within two. Kase went down the right side and squeezed a shot between Hellebuyck and the left post at 15:46 for his sixth of the season.

The Jets put the game away with power-play goal as Connor hit Scheifele at the Leafs blue line and he split the defense and scored between Woll's pads his sixth of the year at 8:14 of the third period.

NOTES: The Jets honored Wheeler in a pregame ceremony with a silver stick and a video montage of his career, which started with the Boston Bruins in 2008 and took him to Atlanta before moving with the Thrashers to Winnipeg in 2011. The Jets wore Wheeler jerseys during the warm-up.

Toronto: Hosts Columbus Blue Jackets on Tuesday, the opener of a three-game homestand.

Winnipeg: Host the Carolina Hurricanes on Tuesday, the last game of a four-game homestand.