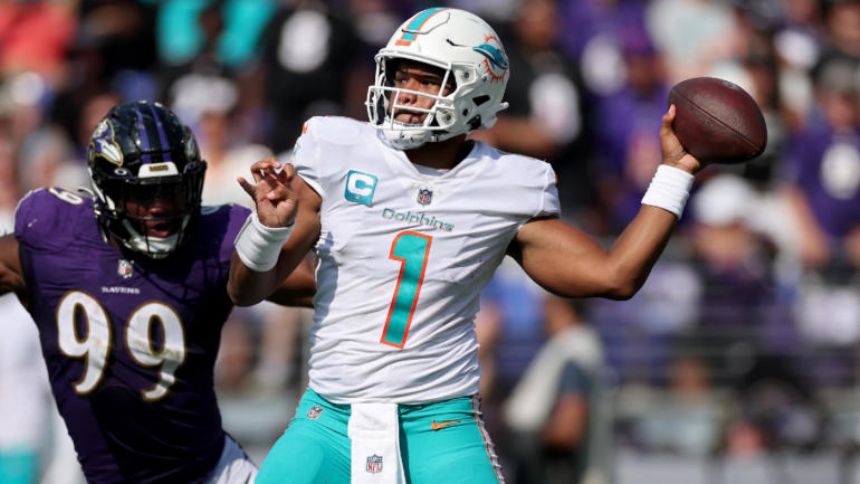 Because of an injury, Tua Tagovailoa never got to play the fourth quarter of his final season at Alabama, missing the last three games.'

In the fourth quarter of Week 2's improbable comeback win over the Ravens in Baltimore, the Dolphins and Tagovailoa played like the young quarterback was once again running the combustible Crimson Tide offense.

Through three quarters, Tagovailoa had pieced together a solid but far from reputation-altering stat line: 23-of-33 for 270 yards with two touchdowns and two interceptions, and the Dolphins were in a seismic hole, 35-14. Tagovailoa was 15 game minutes away from droves of told-you-so critics emerging from the shrubbery with legitimate evidence as to why Tagovailoa was not quite good enough to take these Dolphins to new heights.'

Right as those naysayers were collectively inhaling to begin listing the reasons for their disapproval of Tagovailoa -- like Ace Ventura on the Finkle family porch -- the polarizing quarterback went nutty, completing 13 of 17 passes for 199 yards with four more touchdown strikes without a pick, and the detractors sunk into the bushes out of sight -- in famous'Homer Simpson GIF'fashion.

Miami's fourth-quarter surge had a strong Tagovailoa-at-Alabama vibe. Tua didn't surgically dice up the opposing secondary with a plethora of pinpoint, tight-window lasers. He accentuated the talent of his dynamic weapons with deep connections and a sprinkle of improvisational flair.'

And that smidge of ad-lib ability appeared at the start of the comeback.'

Check the spin cycle Tagovailoa put on the Ravens defender to create space before finding River Cracraft for the score. Flashy.'

On the next drive, from his own 42-yard-line, Tagovailoa reached back and uncorked a bomb to Hill, who'd scurried well beyond the defense, for six. The throw traveled nearly 60 yards in the air.'

The Dolphins were smart to pick on a rookie -- though he's uber-talented -- in first-round safety Kyle Hamilton, who was shaded toward Hilll at the snap but got caught flat-footed peeking at a post instead of retreating down the field to follow Hill's go route.

That score brought the Dolphins within one score with under eight minutes to go in the contest. Then, Miami's defense tightened and got the ball back to the offense.'

On a 3rd-and-6 a few plays into the drive, the Ravens' aggression got the best of them. Running a coverage without deep safety help, Baltimore left rookie Jalyn Armour-Davis, playing in his first NFL game, one-on-one with Hill down the left sideline. But Armour-Davis didn't follow Hill downfield, seemingly expecting safety help over the top that was nowhere remotely close.'

Now, at this point, you'd be perfectly justified to ask yourself, "How in the world can a defense allow Hill to run that open?" Well, in this scenario, I'd answer your question with another question, "Did you ever watch Alabama during the Devonta Smith, Henry Ruggs, Jerry Jeudy, and Waddle era?" It's a serious challenge for cornerbacks and safeties to properly manage verticals everywhere when there's simply so much speed on the field.'

After Justin Tucker's field goal, Tagovailoa marched Miami right down the field and, once again, flashed some improvisational ability on the game-winning touchdown to Waddle. Perfect placement, too, above the defender, where the explosive Waddle could go up and get it.'

Now, I'm not immediately placing Tagovailoa among the game's elite quarterbacks after this game, despite his gaudy statistics in it. Miami's historic comeback was as much about the acquisition of Alabama-like talent for Tagovailoa as it was about the individual play of Tagovailoa himself.'

And that's OK! Not every quarterback has to be a superhero for his team to be successful. Oh, and while I'm on this topic -- every quarterback wearing a cape in today's NFL has a quality cast of characters around him. Every single one. Quarterback is the most important position in football, but football remains the ultimate team sport.'

The Dolphins won't have Alabama-sized talent advantages over opponents in 2022. Talent gaps that large don't exist in the NFL, as the first two weeks of this season have clearly reminded everyone.'

But, this offseason, Miami's front office looked to Alabama as a blueprint into building a roster tailor-made for Tagovailoa -- with better blocking and incendiary speed everywhere. And it just might get him to play like he did in Tuscaloosa.