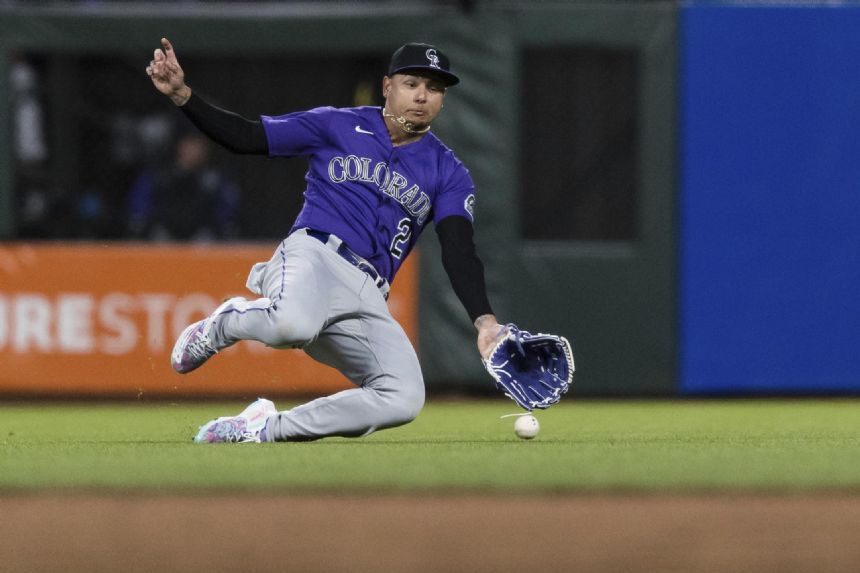 SAN FRANCISCO (AP) - Alex Wood pitched into the sixth inning and didn't allow an earned run, Brandon Belt had an RBI double in his return to the lineup and the San Francisco Giants won their ninth straight against the Colorado Rockies, 9-2 on Tuesday night.

Curt Casali added three hits and two RBIs for San Francisco, which has won four straight since losing five in a row.

Wood (3-2) lost his previous two starts. He got into jam in the first inning before getting Elias Diaz to strike out looking, and the left-hander also fanned Garrett Hampson looking to end the fourth with a runner on second after the Rockies scored an unearned run.

Wood allowed seven hits and struck out four in 5 1/3 innings.

Yonathan Daza singled, doubled and tripled for the Rockies. C.J. Cron and Jose Iglesias each had two hits.

The Giants have had 10 or more hits in every game of their winning streak against Colorado but led 3-0 with help from the Rockies defense.

With the bases loaded, Luis Gonzalez hit a chopper over the head of pitcher Antonio Senzatela that Iglesias bobbled behind the mound as Joc Pederson scored. Casali followed with an RBI single to right, and a second run scored when Charlie Blackmon failed to field the ball cleanly.

The Giants had their own defensive issues.

Gonzalez ran to pick up Daza's double to left in the fourth, but the ball kicked off his glove for an error, allowing Ryan McGregor to score.

After Belt's double in the fourth made it 5-1, pinch-hitter Austin Slater and Casali drew bases-loaded walks in San Francisco's three-run fifth.

The second inning could have been worse for Colorado had it not been for a heads-up throw by Blackmon that resulted in a unique 4-9-6 out at second base. With two runners on, LaMonte Wade Jr. lined one that deflected off the glove of leaping second baseman Hampson into right field.

Casali, who was on first base, hesitated and took a step back toward first, slipped, then turned and ran the other way, giving Blackmon enough time to field the ball and fire a perfect throw to shortstop Iglesias, who had raced over to cover second.

Giants: Belt had been dealing with a stiff neck and was a late scratch Monday. ... Wilmer Flores was scratched because of lower back tightness. Mauricio Dubon started at third base in Flores' absence.

Colorado's Chad Kuhl (3-0, 1.82 ERA) has allowed one run or fewer in four of his five starts this season. The right-hander is winless in three career starts against the Giants. San Francisco RHP Alex Cobb (1-1, 4.80) hasn't won since his first start of the season on April 12.