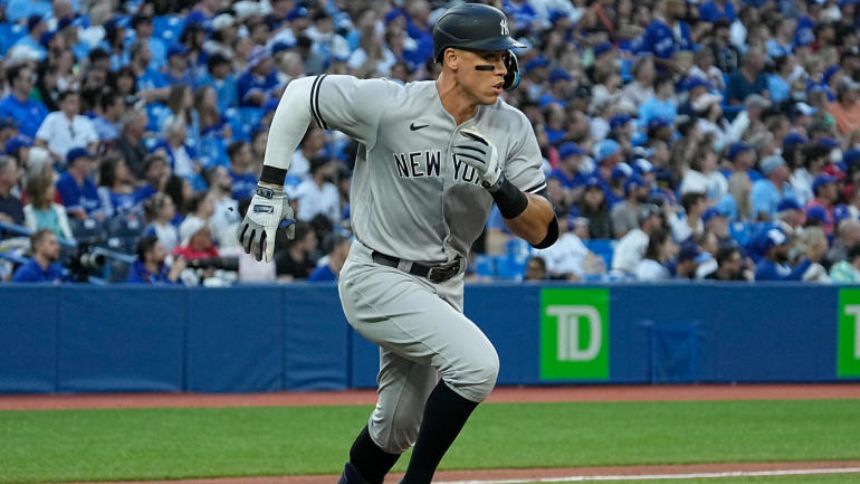 AL East foes collide when the New York Yankees (48-16) and the Toronto Blue Jays (37-27) match up on Saturday afternoon. The Yankees defeated the Blue Jays 12-3 in the first contest of their three-game series. That marked New York's eighth straight victory. On the flip side, Toronto has dropped two straight games. Jameson Taillon (7-1, 2.93 ERA) starts for New York. Alek Manoah (8-1, 1.67 ERA) is on the hill for the Blue Jays.

The first pitch is set for 3:07 p.m. ET. Toronto is the -135 moneyline favorite (risk $135 to win $100) in the latest Yankees vs. Blue Jays odds from Caesars Sportsbook, while New York is a +115 underdog. The over-under for total runs scored is 8.5. Before locking in any Blue Jays vs. Yankees picks, you need to see the MLB predictions and betting advice from SportsLine's advanced computer model.

The SportsLine Projection Model simulates every MLB game 10,000 times and it is off to a strong start to the 2022 season. It's on a 55-42 roll on top-rated MLB money-line picks through 10 weeks, returning over $600 for $100 players. Anyone following it has seen huge returns.

Now, the model has set its sights on Yankees vs. Blue Jays, and just locked in its picks and MLB predictions. You can head to SportsLine now to see the model's picks. Here are several MLB odds and betting lines for Blue Jays vs. Yankees:

First baseman Anthony Rizzo is a big-time slugger for the Yankees. Rizzo owns outstanding power and run-producing abilities with his monster swing. He also plays sound defense in the corner as he's a four-time Gold Glove Winner. The three-time All-Star is ranked eighth in the MLB in home runs (17) and RBIs (47). In his last outing, Rizzo went 2-for-3 with a grand slam.

Second baseman Gleyber Torres is an all-around talent. Torres is a pure hitter with the capability of hitting for power and average. The two-time All-Star has good arm strength and range on the defensive side as well. Torres is batting .254 with 12 home runs and 29 RBIs. On June 17, he went 2-for-4 with two doubles and one RBI.'

First baseman Vladimir Guerrero Jr. has a natural and effortless swing. Guerrero Jr. knows how to make consistent contact with the baseball due to his pitch recognition and awareness at the plate. The 2021 All-Star is leading the team in home runs (16) and RBIs (39). On June 15, he went 4-for-5 with a solo home run, two RBIs and three runs scored.

Center fielder George Springer is also an important contributor. Springer has a great combination of home-run power with solid speed on the defensive end. The three-time All-Star displayed enough range in the outfield with a reliable throwing arm. Springer has a batting average of .266 with 12 home runs and 33 RBIs.'

SportsLine's model is leaning over on the total, projecting 8.9 combined runs. It also says one side of the money line has all the value. You can only get the model's MLB picks at SportsLine.

So who wins Yankees vs. Blue Jays? And which side has all the value? Visit SportsLine now to see which side you need to jump on, all from the model that has crushed its MLB picks, and find out.'