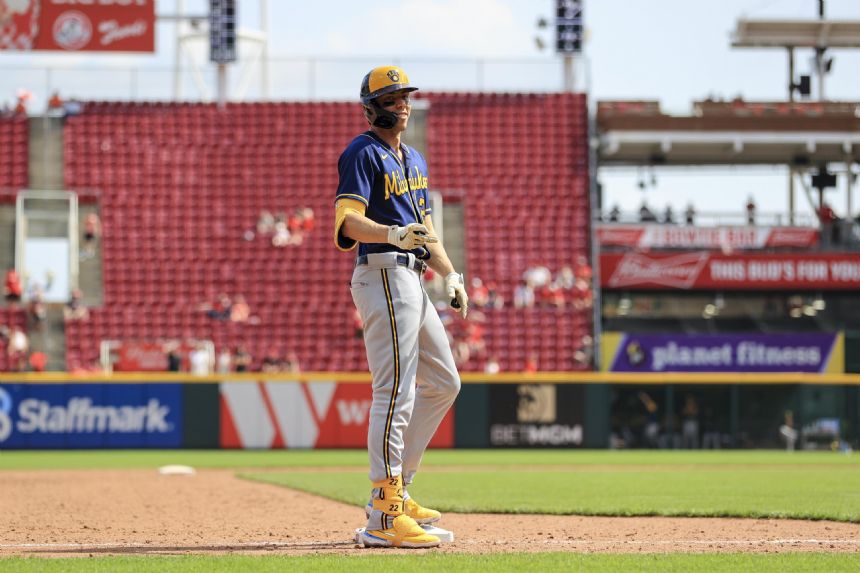 CINCINNATI (AP) - Christian Yelich hit for a record-tying third cycle - all of them against Cincinnati - but the Milwaukee Brewers' rally fell short in the ninth inning of a 14-11 loss to the Reds on Wednesday.

Tyler Stephenson drove in four runs with a pair of doubles and Colin Moran hit a three-run homer for Cincinnati. Alexis Diaz (1-0) got four outs for the win.

The Reds, with the worst record in the majors, won their second straight series by topping the NL Central leaders.

NEW YORK (AP) - Gleyber Torres homered and drove in five runs, and the Yankees beat the Blue Jays for their 15th win in 17 games.

New York won its seventh straight series and improved to a major league-best 22-8, its best 30-game start since 2003. The Yankees are 13-0 when scoring five runs or more.

Toronto has lost a season-high four straight and seven of nine. Jose Berrios (2-2) gave up five runs and five hits in 5 1/3 innings, raising his ERA to 5.82.

SAN DIEGO (AP) - Alfonso Rivas hit a tiebreaking two-run single against his hometown team in the eighth inning, leading the Cubs to the victory.

Rivas, who grew up in Chula Vista, came up with the bases loaded and singled to center off Luis Garcia (0-2).

One-time Padres pitcher Rowan Wick got a six-out save, striking out Manny Machado to end the eighth with a runner on second. It was his second save in as many chances.

Chicago took two of three in the series after arriving in San Diego with a five-game losing streak.

The Padres announced during the game that manager Bob Melvin had prostate surgery and is expected to make a full recovery.

San Diego tied it at 5 on solo homers by Eric Hosmer and Luke Voit in the seventh.

PITTSBURGH (AP) - Daniel Vogelbach hit a go-ahead homer in the seventh inning, and the Pirates took a series from the Dodgers for the first time in nearly five years.

Vogelbach lined a shot to the seats in right field off Daniel Hudson (1-2), putting the Pirates back in front after they squandered a three-run lead in the top of the inning.

Jack Suwinski hit his second home run in three days for Pittsburgh. Josh VanMeter also homered off Dodgers reliever Tommy Kahnle in the sixth, but he committed an error in the seventh that helped kickstart a Los Angeles rally highlighted by Edwin Rios' bases-clearing double off Chris Stratton.

Wil Crowe (2-2) got the win, and David Bednar worked two perfect innings for his fifth save.

Pittsburgh, which entered the series having lost 16 straight games to the Dodgers, took two of three for its first series win against Los Angeles since a three-game sweep in June 2016.

Miami controlled most of the game until the eighth, when pinch hitter Jordan Luplow connected for a tying two-run homer against Marlins reliever Steven Okert.

Miami responded quickly against Mark Melancon (0-4). Stallings' single put the Marlins back in front. Chisholm then drove a low pitch out to left-center.

Avisail Garcia and Joey Wendle also homered for the Marlins. Anthony Bass (1-1) got the win.

D-backs rookie Alek Thomas hit his first career homer in the third, a solo shot over the 413-foot sign in center.

SEATTLE (AP) - Rhys Hoskins homered for the third straight game and provided all of Philadelphia's offense with his second career grand slam.

The Phillies took two of three from the Mariners. Hoskins hit solo homers in each of the first two games and provided the big blow with his first grand slam since March 28, 2019, against Atlanta.

Hoskins lined a 2-1 pitch from Logan Gilbert (4-1) just inside the foul pole down the left-field line with one out in the fourth inning.

Seranthony Dominguez (2-1) got the win, and Corey Knebel earned his sixth save.

Julio Rodriguez and Ty France each hit an RBI single for the Mariners.

Colorado lost its fourth in a row.

San Francisco handed Chad Kuhl (3-1) his first loss of the season, tagging him for five runs in 4 2/3 innings. It was just the second time in six starts that Kuhl allowed more than one run.