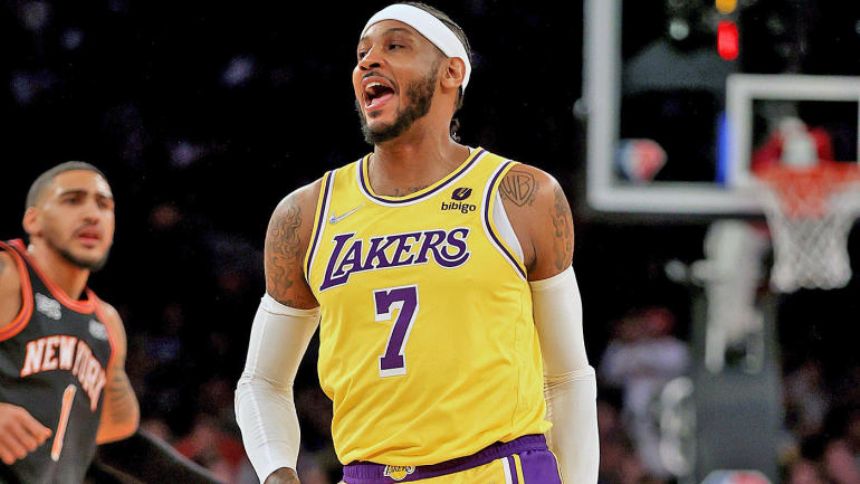 At this point in the offseason, most of the big-name free agents are already off of the board. However, that doesn't mean there's a dearth of available talent. On the contrary, there are a plethora of productive players who could prove very impactful still waiting to be signed. Here's a look at 10 of the top remaining unrestricted free agents currently available on the market.'

It was only two years ago that Harrell was named Sixth Man of the Year for his production off of the bench as a member of the Los Angeles Clippers. That season he averaged 18.6 points, 7.1 rebounds and 1.7 assists in 27.8 minutes per game. His production has dipped in the two seasons since, but at just 28 years old he could still prove to be a productive player off of the bench for a contender, much like he was with the Clippers.

One of the most elite shot-makers of his era, you know exactly what you're getting from Carmelo Anthony at this point in his career. You're not signing him for his defense, or his playmaking. You're signing him because of his ability to put the ball in the basket, and he's still capable of doing that at a relatively high level. He averaged over 13 points per game off the bench for the Lakers last season while shooting 44 percent from the floor and 37 percent from long range. For a team looking for some added firepower off of the bench, Anthony is still serviceable.

Bledsoe is still available on the market, and the veteran could be a beneficial addition for a team looking to bolster its point guard depth. Bledsoe has always been a solid defender for his size, as he's just two years removed from an All-Defensive Second Team selection, and three years removed from a First Team nod. He may have lost a step at that end, but he can still apply pressure, especially in a reduced role. Plus he's more than capable on the offensive end, where he holds career averages of 13.7 points and 4.7 assists per game. '

Obviously, Cousins isn't the player he once was when he was making All-Star teams with the Kings and Pelicans, but he's showed over the past couple of seasons that he can still operate well as a backup big. He still rebounds at a high rate. In fact, he averaged the most rebounds per 36 minutes of his entire career with the Nuggets last season (14.4), and he still has a feathery touch that can stretch out to the three-point line. As such, he could be a boon to a team looking to bolster its frontcourt depth.

Bradley was a prototypical 3-and-D player in his prime, and he still shows off that skill set in spurts. He's not going to lock down the opponents' best perimeter players for extended amounts of time, but he could still make things difficult for stretches. Plus, he can still space the floor on the other end. Just last season he shot 39 percent from long range with the Lakers. As a rotation piece, Bradley could still be a valuable contributor to a contender, or any team for that matter.'

Aldridge is a big man who is capable of spacing the floor with his shot, which is a major commodity in the league today. He averaged nearly 13 points and 5.5 rebounds in 22 minutes per game with the Nets last season, while shooting 55 percent from the floor. So, clearly, he still has some gas left in the tank. He's probably not a starter at this point in his career, but he's still capable of providing a contending team with some productive minutes.'

At just 28 years old, Schroder still has some good ball left in him, and he's proven over the course of his career that he's comfortable either as a starter or reserve. In other words, it shouldn't be hard for an interested team to find a role for him. With career averages of 14.2 points and 4.7 assists per game, Schroder has established himself as a legitimate offensive option, and he has the ability to provide a boost on that end to whatever team ultimately signs him.'

It's tough not to wonder "what if" when it comes to Isaiah Thomas's career, but the reality is at this point he's a fringe NBA player, as evidenced by the fact that he's bounced around to a handful of different teams over the past few years. Nonetheless, he showed that he's still capable of producing some points off of the bench during his brief stint in Charlotte last season. In fact, the Hornets are reportedly considering bringing him back next season, so he obviously impressed Charlotte's front office to an extent. If not the Hornets, perhaps a different squad will give him another chance.'

Williams is clearly in the twilight of his career, and there's a chance that he has already played his last game in the NBA. But even at this stage, he's a guy who could come in and give a team a boost off of the bench on a good night. He's not going to score 20 on a nightly basis as he did at the peak of his powers, but he could likely recreate such performances on occasion, and thus he's still a threat that opposing defenses need to respect.'

The days of an offense running through Howard are long gone, as are Howard's days as a starter in the NBA. But, the big man is still a productive rebounder, a decent deterrent at the rim on the defensive end, and he can still finish around the rim on the other end. A team looking for some added frontcourt fortification could do worse than Howard.'