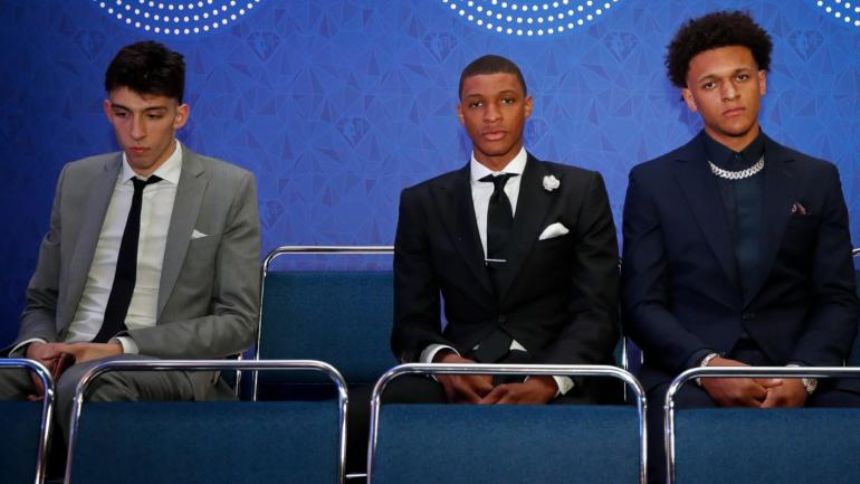 We'll find out on Thursday night who the Orlando Magic value as the No. 1 pick as they select first overall for the first time since 2004 -- but there's far from a consensus view at the top of this draft among NBA front offices. And ditto for our team of experts. In our final comprised of a consensus taken from rankings by AP Sports experts Gary Parrish, Matt Norlander, David Cobb and myself, along with Adam Finkelstein and Travis Branham of 247Sports, there were four different players who earned votes at No. 1.

but our math in the consensus rankings determined Chet Holmgren was deserving of the honor -- but below each of us have stated our cases for our choice as the No. 1 pro prospect in this year's draft. Here's who each of us had in the top spot, and why, as we barrel towards Thursday night's draft with a wide range of views about the top of the class.

Want more analysis of the top prospects in the NBA Draft? Listen below and subscribe to the Eye on College Basketball podcast where we take a deep dive on the top players heading to the next level.

I understand the arguments for Jabari Smith, Paolo Banchero and even Jaden Ivey to go first overall in the 2022 NBA Draft. I don't think any of them are ridiculous options. But I still genuinely believe Holmgren is the best prospect available this year, and that's why I also believe Orlando should take him with the No. 1 pick. He's an elite rim-protector on defense who can float on offense, bounce it, shoot and generally exploit matchups.'

If a traditional big guards him, he can likely go around him. If a smaller player guards him, he can definitely shoot right over him. Am I concerned about the slight frame? Sure, on some level, I guess. But as ESPN's Jonathon Givony noted on a recent podcast, how many great prospects have fallen short of greatness strictly because they're too skinny? He couldn't think of any. Neither can I. So I'm just going to assume Holmgren's unique skill-set will allow him to overcome his unique frame and eventually emerge as the best player from this draft. -- Gary Parrish

Holmgren has the highest ceiling in the draft in my opinion. He changes the game on both ends of the floor. There just aren't many 7-footers, anywhere in the world, who can protect the rim, stretch the floor, and still provide such an efficient interior finishing presence. He's even a better ball-handler and passer than I think some people are giving him credit for. But on top of all of that, I'm just a big believer in his mentality and that inner-toughness. I know he has to build up his body, but if there's one thing that NBA teams have all figured out how to do at an exceptionally high-level, it's that. -- Adam Finkelstein

We know the entire world is questioning his physique but the truth is, Holmgren has never had a history of injuries or shown that his lack of strength is an actual hindrance. You won't be able to throw him at the Joel Embiids of the world, but no one can throw anything at him. In four to five years, we could legitimately be talking about him being one of the faces of the League with his ability to dribble, pass and shoot unlike any we have seen at his size and length along with the fact that he is an elite defender and rim protector. -- Travis Branham

I understand the allure of Smith and Banchero, but to me Holmgren's upside is a notch above. Smith lacks playmaking potential -- Holmgren can blossom beautifully in that department. Banchero's suspect as a 3-point shooter and on defense -- Holmgren has a sweet stroke and is one of the best rim-protecting prospects we've ever seen. I don't buy the boisterous ravings about the unique body type, either. Holmgren's been able to hold his own against stronger players his entire life, and the NBA rules will continue to evolve in his favor. He's already proven that he can perform at the highest levels of amateur basketball, and he also has the most room to improve of any of the top three prospects. Add it all up, and that certainly sounds like the best player in the draft class. -- Colin Ward-Henninger

Be it for APSports.com, on Eye on College Basketball or on AP Sports HQ, I've explained my position on having Banchero No. 1 on my big board many times in recent weeks. But here, right up against the draft, once more, with feeling. Banchero is the most sensible pick of any player in this class because he's the most developed and proven talent. His numbers at Duke, with multiple other first-rounders in the starting lineup, were beyond satisfactory: 17.2 ppg, 7.8 rpg, 3.2 apg for the top-rated offensive team in the nation, per KenPom.com.'

Banchero was a 52.% 2-point shooter and 33.8% from 3-point range. Nobody in this draft has Banchero's combination of size + skill + touch + passing ability + play-creation + rebounding prowess + competitive edge. He has an above-average handle, can work the post, shoot from beyond the arc, and isn't a black hole. The hesitation with him at No. 1 stems from the fact that he's not as potentially damaging of a 3-point shooter as Jabari Smith, Chet Holmgren and even Jaden Ivey are. But he can still shoot it. Defensively, he's got more ground to make up. No one is as ready to play in the NBA tomorrow like Banchero, though, and I think that he'll ultimately prove to be a multiple-time All-Star by the end of his second contract.'-- Matt Norlander

There are safer prospects at the top of this class (Smith Jr.) and bigger boom/bust propositions, too (Holmgren), but no one possesses the rare combination of explosive athleticism and creation ability that Ivey has in this draft. He's a human firecracker who can pop to the rim. He has the potential to develop into a true lead guard at the next level if he continues to develop and improve as a decision-maker.'

At worst he can be a change-of-pace initiator whose dynamic explosiveness helps ease the burden of a team's No. 1 initiating option. I'd take him No. 1 over everyone in this class on the chance his playmaking improves even marginally, if not substantially, and his improvement as a shooter over the last year portends very nicely for him as a blossoming star entering the NBA. --'Kyle Boone

What most clearly separates Smith from Banchero, Holmgren and others as the best pick at No. 1 in the 2022 NBA Draft is his elite outside shooting. At 6-10 and with a 42% 3-point mark on 5.5 attempts per game in his lone season at Auburn, Smith projects as an excellent long-term shooter at the next level. While Banchero and Holmgren each flashed some range from the perimeter in their lone college seasons, neither projects as elite in any facet of the game quite like Smith does as an outside shooter.'

Given that Smith also boasts excellent defensive upside and a blossoming shot-creation portfolio offensively, he is the safest bet of the group to one day be an NBA All-Star. With promising young guards like Jalen Suggs and Cole Anthony distributing the basketball in Orlando, Smith would make an excellent addition to the Magic's core group. Though it may take years for Smith to reach his full potential, it's easy to see him becoming the Magic's leading scorer early in his career due to feathery shooting touch he'll bring into the league on day one. -- David Cobb