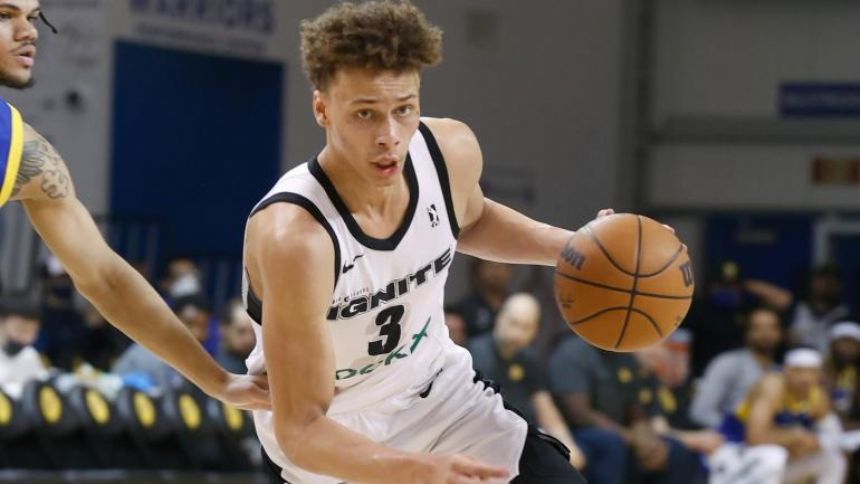 NEW YORK -- There is deep irony in the fact that many people's first exposure to Dyson Daniels came at this year's Rising Stars, event during All-Star weekend. Daniels, who spent this past season with the G League Ignite, the NBA's developmental team, held his own in the glorified pick-up game, but such showcases do not tend to highlight sound decision-making and defensive positioning, the sort of stuff that makes him a likely top-10 pick in Thursday night's NBA Draft. They tend to highlight highlights.'

"Every pick-up game is tough to play in for me, the way I play," Daniels said the day before the draft. "Everyone just wants to get up and down, shoot 3s and stuff like that."'

Daniels, who turned 19 in March, was speaking after stepping off of the court at the NBPA facility in Midtown Manhattan, where he and other prospects put smiles on kids' faces at a Jr. NBA clinic. He is not that much older than those kids, and he remembers being in their position, doing drills with fellow countryman'Matthew Dellavedova, then "my idol," now a mentor, at a Peak-sponsored camp. But the native of Bendigo, Australia, seems uncommonly poised to make a smooth transition to the next level, poised to make Delly even more proud than he already is, poised to become a walking advertisement for the Ignite and the NBA Global Academy in Canberra.'

The guy is just poised. Generally. When Daniels visited with lottery teams in the weeks before the draft, executives repeatedly complimented him on this particular attribute.'

"I think I've always had it," Daniels said. "The poise, it's just something that I grew up with. In Australia we get taught to play under control, play at our own pace."

Daniels matter-of-factly talked up his basketball IQ and his ability to play multiple positions and fit in different kinds of lineupsMany NBA hopefuls try to get attention by piling up numbers. In the G League, where everyone is an NBA hopeful, Daniels stood out by making the right play, over and over, regardless of what was going on around him.'

"That's the Australian way," he said.'

It takes a certain confidence to choose the Ignite, still in its infancy, over the NCAA and over the NBL's much-closer-to-home "Next Stars" program. It takes another kind of confidence to weather a shaky start, play within yourself and sacrifice your individual offense when every game and practice is an audition in front of NBA personnel. Daniels is projected to be picked significantly higher than former teammates Jaden Hardy and MarJon Beauchamp despite averaging significantly fewer points and shot attempts. His shooting remains a work in progress, but he showed scouts that he can take contact, make floaters and serve as both an initiator and a connector on offense.'

"I think for me it's my defense as well that I bring," he said. "The defensive intensity. i can guard 1 through 4, and 5 even sometimes. Yeah, and then my offense, it's come a long way. But I think a lot of teams look for a guy that can run a team, distribute the ball."

When Daniels, whose father, Ricky, played at NC State and for the Bendigo Braves, arrived in Walnut Creek, California, to train with the Ignite, the pro-style atmosphere was nothing new. At the Global Academy in Canberra, he lived with 20-plus other players, training at the Basketball Australia Centre of Excellence, on the enormous Australian Institute of Sport campus. "We've got team practices, individual sessions, shooting sessions, weight sessions," Daniels said. "Six days a week we're on the floor; four days a week we're in the weight room." With the Ignite, the biggest change was the style of play, which was "completely different" than what he was used to.'

"Here, it's a lot faster, you're flying up and down; ball screen, make a read, get back on defense," he said. "So it's just about adjusting, knowing when I can go get mine, knowing when to distribute. And knowing my teammates' strengths and how I can get them the ball in a position where they want it."

It helped, Daniels said, that coach Jason Hart put the ball in his hands early on and empowered him to be a 6-foot-7 point guard. He learned how to be stronger with the ball, and he got more comfortable with the speed of the American game. When veteran Pooh Jeter or 18-year-old Scoot Henderson checked in next to him, he'd move off the ball, where he'd "cut, offensive rebound, set little flare screens, stuff like that, just using my basketball mind."

Daniels is smart enough to conceivably play a role right away in the NBA. He is also too smart to present himself as only a supporting character. Offensively, he believes he can model himself after Luka Doncic, he said. And for all of this talk about playing under control, his favorite player is Russell Westbrook and he loves to get out in transition. Intelligent players know when to change gears.'

When Daniels talks about the leap he's about to make, every word sounds appropriately serious, polished and professional. His game, he said, is suited for "real basketball," adding that winning teams in the NBA move the ball and create an environment in which everybody is playing on a string.

"That's when I thrive," Daniels said.