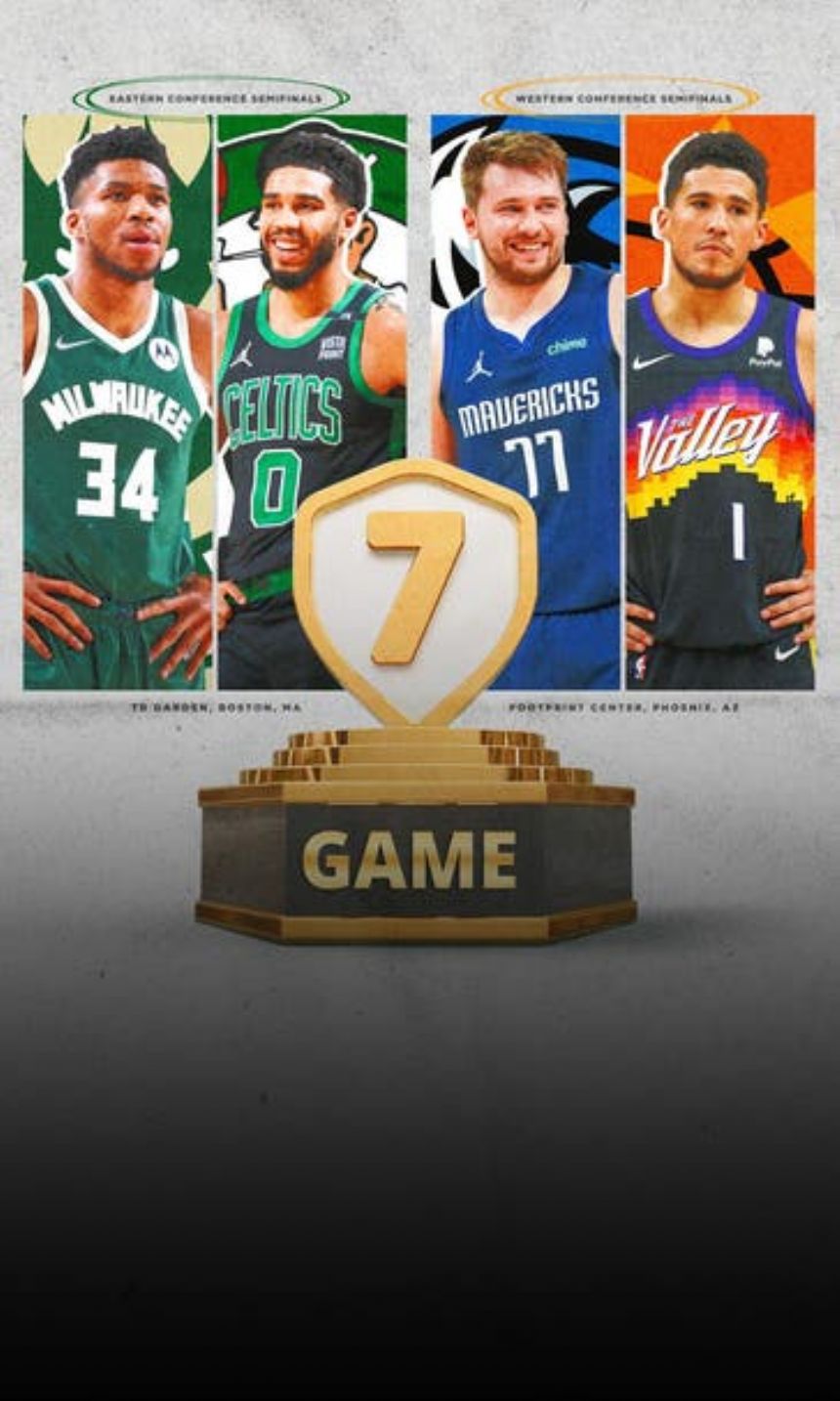 The NBA's long regular season can be tedious, but make no mistake, it matters.

Just ask the Boston Celtics and Phoenix Suns - two teams who have home-court advantage in Game 7 of their respective second-round playoff series on Sunday thanks to superior regular-season records.

The Celtics host the Milwaukee Bucks a few hours before the Suns host the Dallas Mavericks in what could be a drama-filled day.

"It means everything," Celtics forward Jayson Tatum said of getting Game 7 in Boston. "The best atmosphere in the NBA. Game 7s are the biggest and best games. Looking forward to it, truly.

"It's basketball - biggest moments, biggest stage. What it boils down to is now go out there and just have fun."

"We worked all season to have home-court advantage and get the last game in our house," Booker said. "It's exciting. It's Game 7. I've never been in a Game 7, so this will be fun."

Nick Wright predicts whether Chris Paul and Devin Booker will be able to keep the Mavs from moving on to the next round of the playoffs.

The Mavericks have a particularly difficult task in their game against the Suns. The home team has won each of the first six games of the series, and many of those games have been blowouts.

It's the second consecutive year the Mavericks have played a Game 7. Dallas lost to the Clippers in Los Angeles in last year's contest after the visiting team won the first six games of the series.

The Celtics and Bucks have alternated victories throughout their series. By that pattern, it should be the Bucks' turn to get the win. But there's little doubt Boston's home court will be loud and hostile on Sunday.

"For me, I've just got to go play," Bucks forward Giannis Antetokounmpo said. "I want my teammates to enjoy the moment."

Here's everything you need to know about Sunday's two Game 7s.

- Need to know: These teams have alternated victories throughout the series, with the Bucks winning the odd-numbered games and the Celtics taking the even-numbered ones. The road teams are 4-2 and have won each of the last three games.'

Giannis Antetokounmpo showed why he was an NBA MVP in Game 5, finishing with a game-high 40 points and 11 rebounds to help the Milwaukee Bucks overcome a 14-point deficit against the Boston Celtics. Ric Bucher discusses what the Greek Freak has proven this series.

"It's a pain-tolerance thing," Boston coach Ime Udoka said. "Soreness, swelling is down. It's just a matter of extension, inflexion and if the pain is gone basically with the bone bruise. Nothing structural. It's legitimately day to day."

- Pressure is on: Bucks G Grayson Allen: After delivering a 22-point outburst and a 27-point performance in back-to-back games when the Bucks beat the Chicago Bulls in the first round, Allen hasn't been nearly as effective in this series despite moving into a starting role in Game 3. He has scored a total of 23 points over his last five games and has shot 2 of 14 from 3-point range during that stretch. Allen shot 1-for-7 overall and scored three points in Game 6.

- Need to know: The home team has won each of the first six games in this series, which now moves back to Phoenix for the final game. Though the series has been close, the individual games often have been blowouts: Three of the six have been decided by at least 20 points.'

Luka Doncic scored a game-high 33 points as the Dallas Mavericks beat the Phoenix Suns in Game 6. So far, the home team has won all six games in the series. Shannon Sharpe explains why he gives Dallas a "real shot" winning at Phoenix in Game 7.

Mavs star Luka Doncic has averaged more than 32 points per game in the series despite shooting just 29.6% from 3-point range. Doncic has been productive, but his supporting cast has struggled on the road against the Suns. Phoenix is shooting nearly 50% for the series but has struggled with turnovers. Booker leads the Suns with 25.5 points per game.

- Keep an eye on: Suns PG Chris Paul. The 12-time All-Star is having a difficult series, averaging just 6.5 assists, which is well below his regular-season average. The 37-year-old has had a handful of spectacular performances in the postseason over the past two years and the Suns might need another one on Sunday.

- Injury watch: Doncic appears to have a left thigh injury, but he has downplayed the severity. It's something that bears watching in Game 7. Said Doncic: "I just felt like a little pop in the beginning and then when I was warming up it was kind of OK. Now it's a little bit worse. But it's nothing serious."

- Pressure is on: Suns. Phoenix is trying to make it back to the NBA Finals for a second straight season and had the league's best regular-season record. Losing in the second round of the playoffs would be a major disappointment. Dallas doesn't have nearly as great expectations.

Nick Wright is riding with the Dallas Mavericks to defeat the Phoenix Suns in the Western Conference semifinals. He also breaks down the Devin Booker-Luka Doncic rivalry.

Reporting by the Associated Press