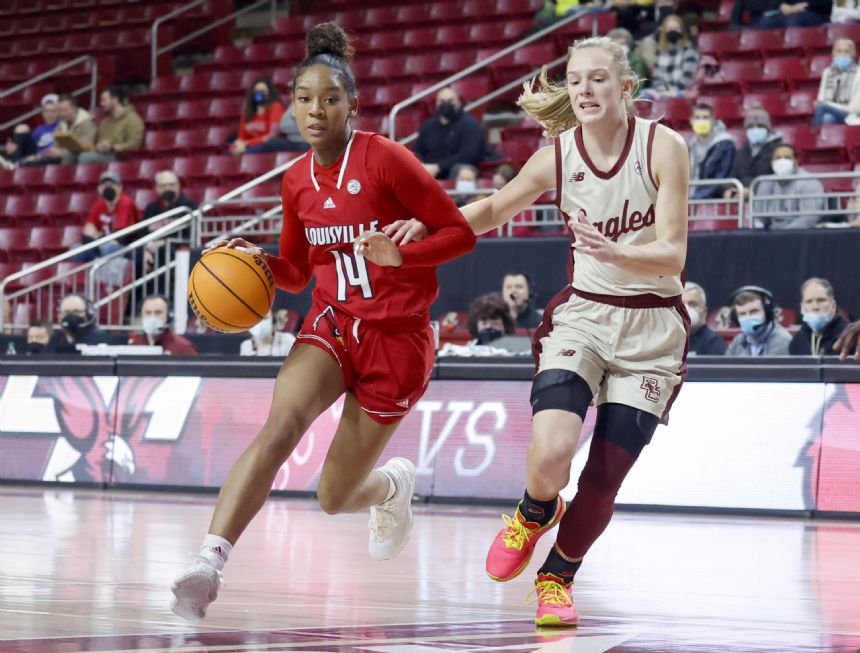 The Cardinals (15-1, 5-0 Atlantic Coast Conference) haven't lost since dropping their season-opener to then-No. 22 Arizona in overtime.

Taylor Soule led Boston College (12-5, 3-3) with 17 points and Cameron Swartz had 12. The Eagles had their four-game winning streak snapped.

The Cardinals pushed a seven-point halftime lead to 37-25 on Smith's 3-pointer early in the third quarter before the Eagles went on an 8-0 run.

BC's bench was whistled for a technical with 1.3 seconds left in the third quarter and Van Lith hit both free throws, giving Louisville a 48-39 lead at the break.

The Eagles never got the deficit below nine points in the final quarter.

Louisville, which trailed by 10 points after the first quarter, relied on its defense which came in ranked second in the nation allowing just 69.6 pointer per game.

The Cardinals got their offense started, too, during a 13-1 spurt to open the second quarter, taking their first lead of the game on Chelsie Hall's left-wing jumper and never trailed again.

They outscored BC 22-5 in the second quarter.

The Eagles had turned poor shooting by Louisville into a handful easy transition baskets in the opening quarter, pulling to a 20-10 advantage after one.

The Cardinals shot only 33% (5 of 15) in the first quarter and didn't make a basket from outside the lane.

In the second, they connected on three shots from beyond the arc and nailed another outside jumper during a 3 1/2 -minute stretch en route to their 32-25 halftime edge. They hit 9-of-16 shots overall in the second.

Louisville: Faced with an early challenge, the Cardinals showed what makes them click - its their defense. They pressed most of the time, pressured the ball handers well and continually contained penetration by the guards, which can make getting into an offensive set hard for their opponents.

Boston College: With all five starters back from last season, the Eagles look like they'll be a tough out in any game. ... They were a lot more competitive than their first meeting against the Cardinals in Louisville, when they lost by 30 points on Dec. 30.